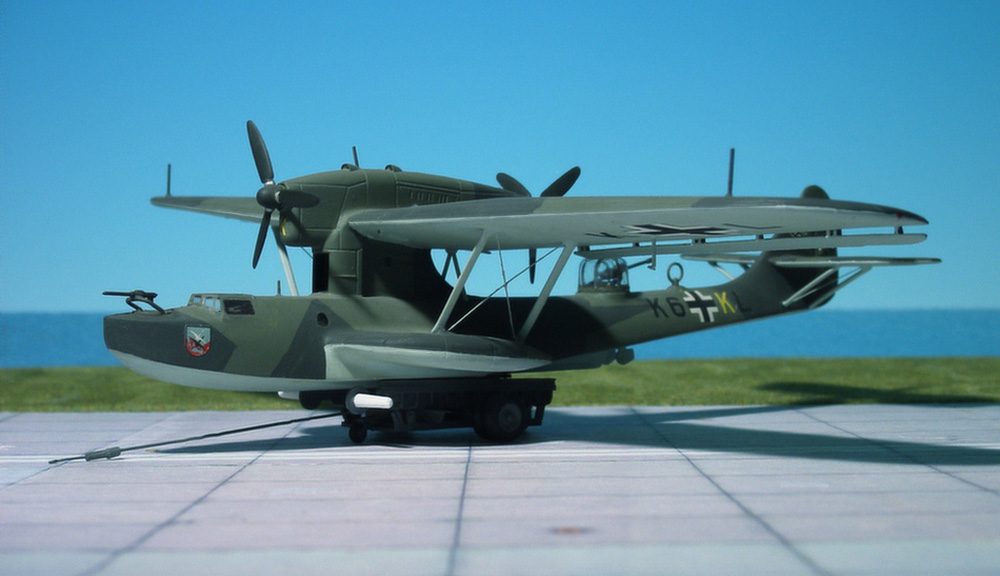 COMMENT: In 1934, the Dornier Flugzeugwerke started development of a new twin-engined flying boat to replace the Dornier Do J “Wal“ (Whale) in both military (Do 16) and civil (Do JI and Do J II) roles. The resultant design, Do 18 retained the layout of the “Wal”, with a metal hull fitted with distinctive stabilizing sponsons, and powered by two engines above the wing in a push-pull layout, but was aerodynamically and hydrodynamically more efficient. It was planned to be powered by two of the new Junkers Jumo 205 diesel engines. Although heavy, these promised to give much lower fuel consumption than conventional petrol engines of similar power.
The Do 18G, 62 units built, was an improved version, powered by two 880 hp Jumo 205D engines, armed with a 13 mm MG machine gun in the bow, and a 20 mm MG 151 cannon in a power-operated dorsal turret.
In German Luftwaffe service, the Dornier Do 18G was obsolete by the outbreak of World War II, but – as the only military flying boat – 62 (58 serviceable) aircraft in five squadrons were in use mainly on North Sea reconnaissance missions. In 1940 some squadrons changed their base to Norway. The vulnerable and underpowered flying boat was soon relegated to training and the air/sea rescue role. In the middle of 1941, only one squadron was still operational on Do 18. The Blohm & Voss Bv 138 had superseded the Dornier Do 18G.
A Dornier Do 18G was the first German aircraft to be shot down by British aircraft during the war, when one of a formation of three was caught over the North Sea by nine Fleet Air Arm Blackburn “Skua” fighter bombers of 803 Naval Air Squadron flying from HMS “Ark Royal” on 26 September 1939 (Ref.: 24).