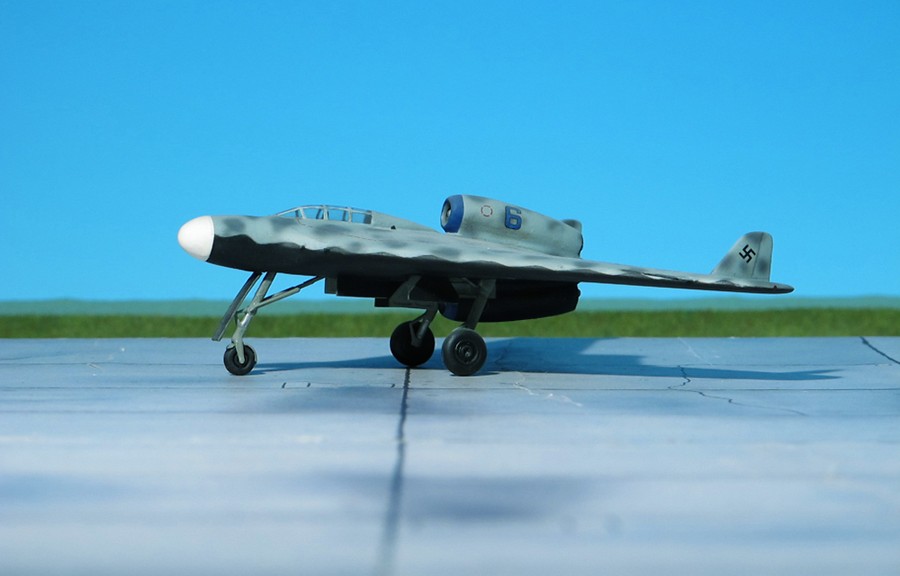 COMMENT:  In August 1944 the Gotha Aircraft Company was given the order of series production of the Horten Ho IX flying wing fighter, designated Go 229A. But additionally, in January 1945 the Gotha engineers proposed a series of altrenate all-wing design to the RLM which used many of the construction techniques as the Horten aircraft but had the advantage of being able to be modified with new equipment and engines without changing the flying characteristics. Three designs were proposed, and designation Gotha Go P.60A, Go P.60B, and Go P.60C was given. All were of delta-shaped., flying wing design, and powered by two turbojet engines at the rear end, one engine above the wing, the other slung under the fuselage. A two men crew sat in a pressurized and armored cockpit, located in the extreme nose. For its duty as night fighter the aircraft was equipped with the most modern radar available at that time. The Gotha Go P.60A was powered by two BMW 003A-1 turbojet engines, rated at 800 kp each, the crew laid in prone position. The Gotha Go P.60B was a further development of the P.60 series which simplified construction by utilizing an easier to build airframe and a conventional rudder. The two-seat cockpit was located behind the radar equipment in a fuselage section. The two engines were upgraded to Heinkel-Hirth HeS 011 turbojets. The RLM approved the construction of the project in 1945, but later construction of the prototype was halted in favor of the Go P.60C. This was the final design of the Gotha Go P.60 series, the P.60C night fighter. The fuselage was lengthened to accommodate the installation of the newest radar set with its “Morgenstern” (Morningstar) or the the FuG 240 “Berlin” antenna. The end of the war prevented further development (Ref.: 16).