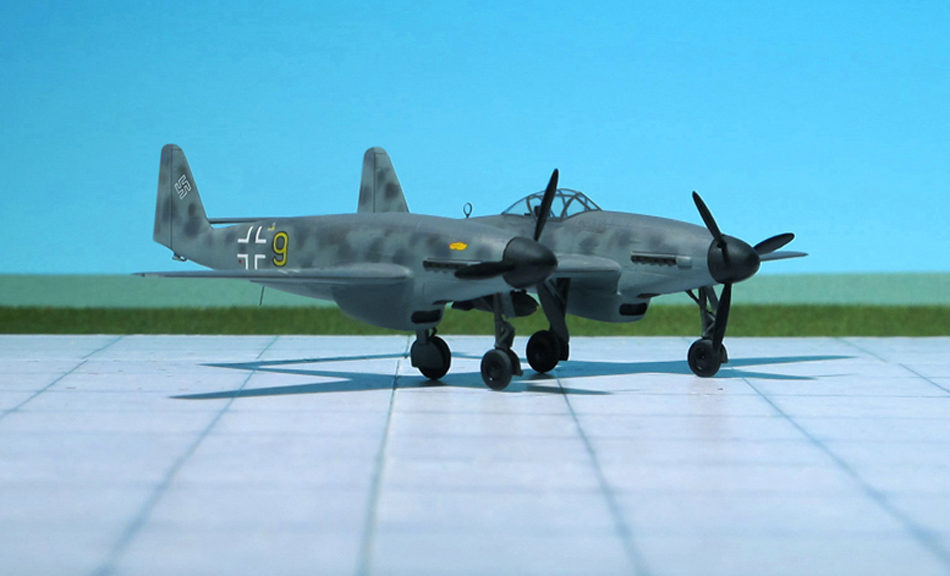 COMMENT: The Messerschmitt Me 609 was a short-lived WW II German project which joined two fuselages of the Messerschmitt Me 309 fighter prototype together to form a heavy fighter.
The project was initiated in response to a 1941 RLM (Reich Air Ministry) requirement for a new “Zerstörer” (destroyer, or heavy fighter) to replace the Messerschmitt Bf 110 in a minimum time and with a minimum of new parts The new design would use components from existing aircraft, thus not disrupting existing production. After the cancellation of the Messerschmitt Me 309 project in 1943, work was continued using it as a basis for other designs. One of these reworked designs was for the Me 509; another was for the 609, which was basically two Me 309 fuselages joined with a new center wing section. Messerschmitt was also working on and had completed a twin-fuselage Bf 109, known as the Me109Z, but the prototype was destroyed before flight testing.
Two Me 309 fuselages were to be joined with a constant chord center wing section, into which two inboard landing gears retracted. The outboard landing gears were resigned, two nose wheels retracted to the rear and rotating 90 degrees to lie flat beneath the engines. This resulted in an unusual four-wheel arrangement.  Power was to be supplied by two Daimler Benz 603 or 605 12 cylinder inverted V liquid -cooled engines. The pilot sat in a cockpit located in the port fuselage, with the starboard cockpit canopy being faired over.
Two versions were envisioned: a heavy fighter (“Zerstörer”) and a high-speed bomber (“Schnellbomber”, fast bomber). In the fighter version, two MK 108 30 mm cannon and two MK 103 30mm cannon were projected as the armament, with a provision for two additional MK 108 30mm cannon mounted beneath the center wing section or under the outer wing sections. In addition, either one SC 500 or two SC 250 bombs could be carried, also beneath the center wing section. The fast bomber version would have reduced armament, with only two MK 108 30mm cannon were to be installed. Extra fuel (1500 kg) could be carried in the faired over starboard cockpit, and the bomb load was to consist of two SC 1000 bombs which were carried beneath each fuselage.
Finally, a two seater night fighter variant was envisioned with FuG 220 “Lichtenstein SN-2” antennas mounted at the outer wings. The pilot sat in the port and the radar operator in the starboard fuselage.
Even though it was calculated that many components of the Me 309 could be used (fuselage, engines, equipment, 80% of the wings), by the time this design began to jell, the Messerschmitt Me 262 turbojet fighter was proving to be the plane of the future, and could take over all roles for which the Me 609 was designed. Thus, the Me 609 project was no longer pursued after 1944 (Ref.: 24).