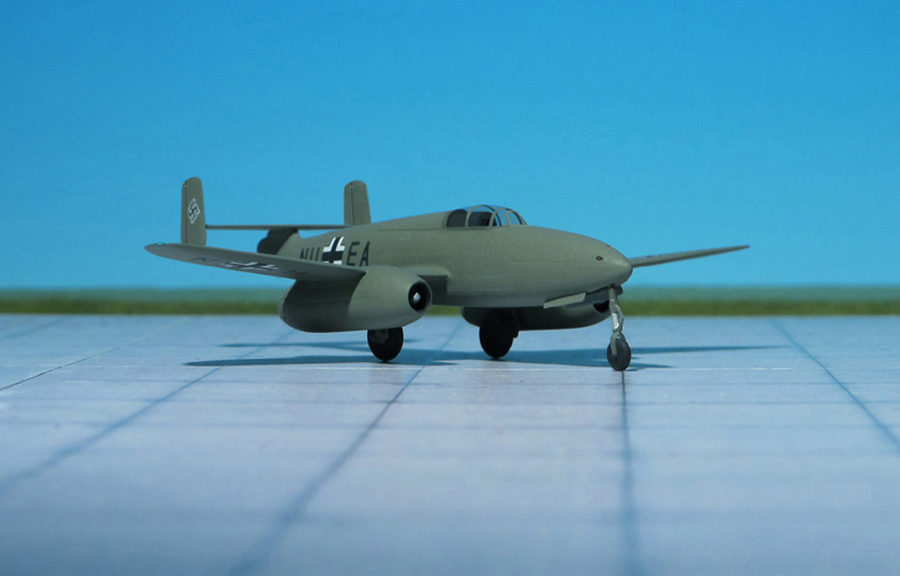 COMMENT: The Heinkel He 280 was the first turbojet-powered fighter aircraft in the world. It was inspired by Ernst Heinkel‘s’s emphasis on research into high-speed flight and built on the company’s experience with the Heinkel He 178 turbojet prototype. A combination of technical and political factors led to it being passed over in favor of the Messerschmitt Me 262 „Schwalbe“ (Swallow). Only nine were built and none reached operational status
The Heinkel company began the He 280 project on its own initiative after the Heinkel He 178 had been met with indifference from the Reichsluftfahrtministerium (RLM, Reich Aviation Ministry).
Work on the project began under the Heinkel designation „Projekt 1065“ in late 1939 but in March, 1940, after receiving official support the designation Heinkel He 280 was applied. The design had a typical Heinkel fighter fuselage, elliptical wings and a dihedralled tailplane with twin fins and rudders. Power was provided by two Heinkel HeS 8 centrifugal turbojet engines and had a tricycle undercarriage landing gear with very little ground clearance. This arrangement was considered too frail for the grass or dirt airfields of the era; however, the tricycle layout eventually gained acceptance. The He 280 was equipped with a compressed-air powered ejection seat, the first aircraft to carry one and the first aircraft to successfully employ one in an emergency.
The first prototype was completed in the summer of 1940, but the Heinkel HeS 8 intended to power it was running into difficulties. On September 1940, while work on the engine continued, the first prototype started glide tests with ballasted pods hung in place of its engines. It was another six months before the second prototype flew under its own power, on March 1941. The aircraft was then demonstrated to Ernst Udet, head of RLM’s development wing, on April, 1941, but like its predecessor, it apparently failed to make an impression. One benefit of the He 280 which did impress the political leadership was the fact that the jet engines could burn kerosene, which requires much less expense and refining than the high-octane fuel used by piston-engine aircraft. However, government funding was lacking at the critical stage of initial development.
Over the next year, progress was slow due to the ongoing engine problems. A second engine design, the Heinkel HeS30 was also undergoing development, both as an interesting engine in its own right, as well as a potential replacement for the HeS 8. In the meantime, alternative powerplants were considered, including the Argus As 014 pulsejet that powered the Fieseler Fi 103 V-1 Flying bomb. It was proposed that up to eight be used.
Engine problems continued to plague the project. In 1942, the RLM had ordered Heinkel to abandon the HeS 8 and HeS 30 to focus all development on a follow-on engine, the Heinkel/Hirth HeS 011, a more advanced and problematic design. But because the HeS 011 was not expected for some time, Heinkel selected the rival BMW 003. However, this engine also had problems and delays. The second He 280 prototype was re-engined with Junkers Jumo 004  The Jumo 004 engines were much larger and heavier than the HeS 8 that the plane had been designed for, and while it flew well enough on its first powered flights from March 1943, it was clear that this engine was unsuitable. The aircraft was slower and generally less efficient than the Messerschmitt Me 262.
Meanwhile, the He 280 V4 and V5 had been completed, the latter with Heinkel-Hirth 001 turbojets and the former with BMW 003A-0 turbojets. The He 280 V5 was considered by Heinkel tob e representative of he proposed He 280A-1 production standart. Ist claimed peformance include a maimum speed of 509 mph at 19,685 ft at normal loaded weight. The Heinkel He 280 V6 was completed with Junkers Jumo 004 engines and full armament from the onset. Amarment consisted of three 20 mm MG 151 cannon in the fuselage nose and one 500 kg or two 250 kg bombs. The He 280 V6 was tested at Rechlin, and in early 1943, Heinkel tendered a proposal to the Technische Amt for the He 280B-1 fighter bomber with two Junkers Jumo 004 engines and an estimated maximum speed of 547 mph.
By this time, flight testing of the Messerschmitt Me 262 V4 suggested that the Messerschmitt fighter would have a performance advantage over the Heinkel He 280 when fitted with similar power plants, and particularly in so fas as range was concerned, this being a serious defect in the Heinkel fighter’s performance. Thus, on March 1943 the Technische Amt instructed Heinkel to abandon all further development of the He 280 as a fighter, permission being given to complete only the nine prototypes which were allocated to various test programmes (Ref.: 7, 24).