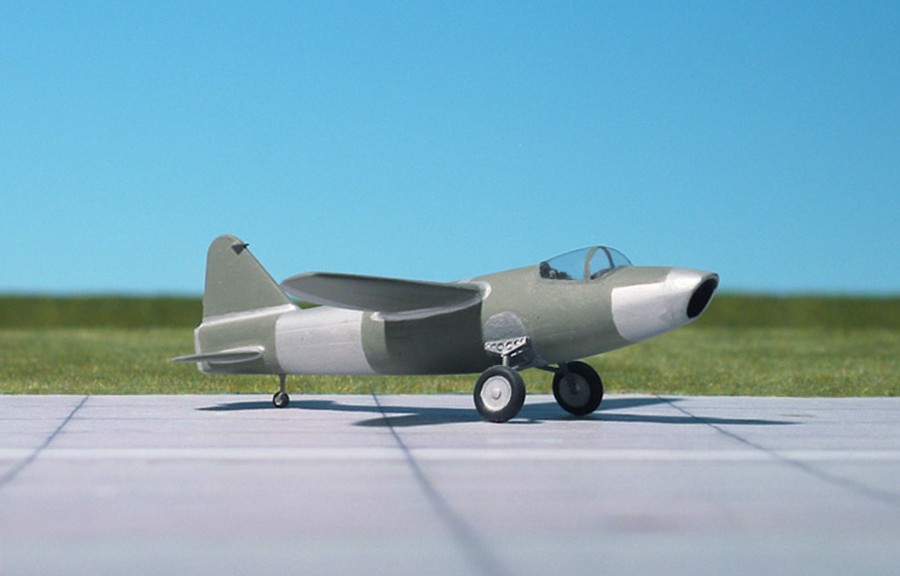 COMMENT: The Heinkel He 178 was the world’s first aircraft to fly under turbojet power, and the first practical turbojet aircraft. It was a private venture by the German Heinkel company in accordance with director Ernst Heinkel‘s’s emphasis on developing technology for high-speed flight. It first flew on 27 August 1939. This flight had been preceded by a short hop three days earlier.
In 1936, a young engineer named Hans von Ohain had taken out a patent on using the exhaust from a gas turbine as a means of propulsion. He presented his idea to Ernst Heinkel, who agreed to help develop the concept. von Ohain successfully demonstrated his first engine, the Heinkel HeS 1 (HeS = Heinkel Strahltriebwerke, Heinkel jet engines) in 1937, and plans were quickly made to test a similar engine in an aircraft. The Heinkel He 178 was designed around von Ohain’s third engine design, the HeS 3, which burned diesel fuel. The result was a small aircraft with a metal fuselage of conventional configuration and construction. The high-mounted wooden wings had the Heinkel-characteristic elliptical trailing edge. The jet intake was in the nose, and the aircraft was fitted with tailwheel undercarriage. The main landing gear was intended to be retractable, but remained fixed in “down” position throughout the flight trials.
The aircraft made its maiden flight on 27 August 1939, only days before Germany invaded Poland. The test pilot was Erich Warsitz, who had also flown the world’s first rocket powered aircraft, the Heinkel He 176, on its maiden flight in June 1939.
Heinkel had developed the turbojet engine and the testbed aircraft, the Heinkel He 178 V1, in great secrecy. They were kept secret even from the German air force, and on 1 November 1939, after the German victory in Poland, Heinkel arranged a demonstration of the jet for officials, which Hermann Göring, commander in chief of the Luftwaffe, did not attend. Ernst Udet and Erhard Milch, Minister of Aircraft Production and Supply watched the aircraft perform, but were unimpressed. While a technical success, speeds were limited to 372 mph even when fitted with more powerful HeS 6 580kp thrust engines and combat endurance was only 10 minutes.
Undeterred, Heinkel decided to embark on the development of a twin-engine jet fighter, the Heinkel He 280 as a private venture using what had been learned from the He 178 prototype. The He 178 V1 airframe was placed on display at the Berlin Aviation Museum, where it was destroyed in an air raid in 1943 (Ref. 24).