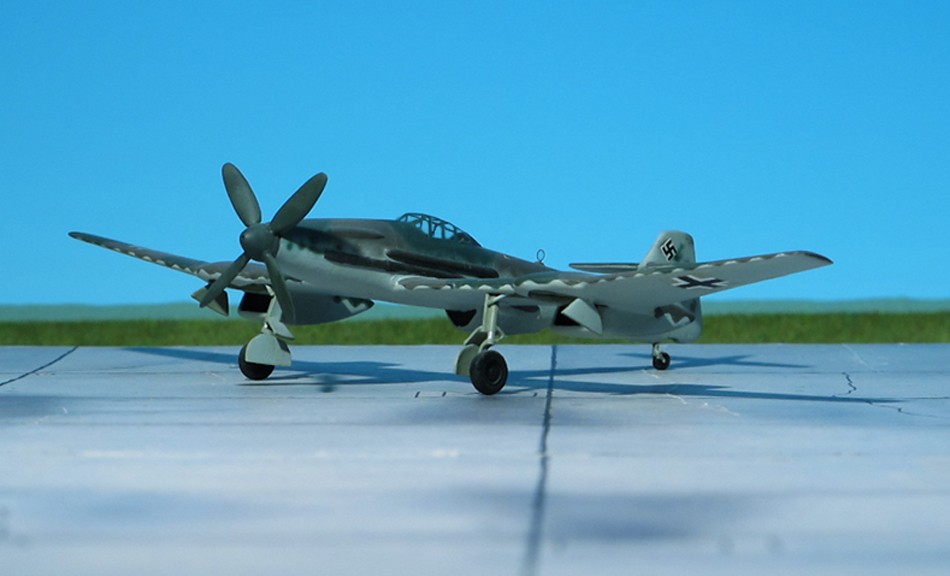 ACCOMMODATION: Pilot only, in pressurized cockpit

COMMENT: The Blohm & Voss BV 155 was a high-altitude interceptor fighter intended to be used by the Luftwaffe against expected raids by USAAF B-29 Superfortresses.  The B-29 would attack in a cruise at an altitude that no German plane could operate effectively. In the hope of countering attacks by this formidable bomber, the Luftwaffe would need new fighters and new destroyers as soon as possible. Work on a special high altitude fighter was started in spring 1942 by Messerschmitt as Me 155, but in 1943 the project was passed over to Blohm & Voss. In September 1943, an order for five prototypes was placed. The first prototype was designated BV 155 V1, and flew for the first time on September 1, 1944. Tests with the V1 showed that the outboard radiators were not sufficiently effective in providing cooling, especially at high angle of attack. The intakes on the next prototype were enlarged and underslung beneath the wing rather than placed over it. However, the enlarged radiators caused a several problems, which required moving the pressurized cockpit forward. The Blohm & Voss team took this opportunity to replace the original Messerschmitt Bf 109G canopy with an aft-sliding all-round vision canopy, and the rear fuselage decking was cut down. This in turn required that a larger rudder be fitted. The ventral radiator bath was also enlarged. All these changes were incorporated into the second prototype, the Bv 155V2, which flew for the first time on February 8, 1945 and which was the first genuine B series aircraft. The Blohm & Voss team was still not satisfied with the design, and before the V2 began its flight trials they proposed that the engine be switched to the DB 603U having the larger mechanically driven supercharger of the DB 603E. The DB 603U promised a power of 1,660 hp for takeoff and 1,430 hp at 49,000 ft. The ventral turbo-super-charger was retained. The Technische Amt decided to accept this proposal, and abandoned all work on the BV 155B in favor of the revised design, which was designated BV 155C (Ref.: 17, 23)