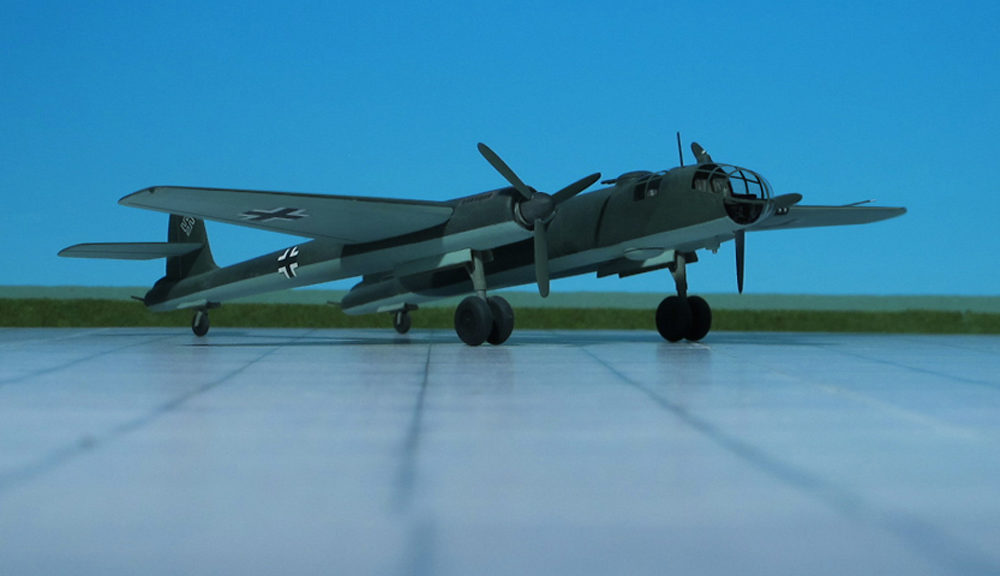 COMMENT: In 1939, the “Technisches Amt des Reichluftfahrtministeriums” (RLM); (Technical Office of the Reich Air Ministry) issued specification for a “Bomber B” requirement.
The Reich Air Ministry ordered the aircraft to replace the Junkers Ju 88 and Dornier Do 217 bombers by 1943. At first four manufacturers submitted plans to the Air Ministry: Arado project E.340, Dornier Do 317, Focke-Wulf Fw 191, and Junkers Ju 288. Later, Henschel was asked to submit its Henschel Hs 130 design due to the expertise of this company with its experiments with pressurized cockpits. Meanwhile, Project “Bomber B” contest winner was the Arado design, officially named Ar 340.
While the designs of all other contenders were of more conventional layout the Arado Ar 340 was designed with a central fuselage containing all four crew members. The cockpit and rear compartment were glazed and pressurized. The projected Junkers Jumo 222 engines were positioned in a unique twin-boom arrangement connected only through the wing assembly, a configuration which offered the crew better visibility. The landing gear was mounted to the load-bearing wing center-section. The tail of the aircraft was a unique design, where the tail plane did not connect the two booms but was cantilevered outwards instead, each similar to the asymmetric Blohm & Voss Bv 141B booms and tail arrangement. Also similarly, this would have provided the rear gunner with a clear range of fire directly behind. The fuselage extended forwards beyond the engines, with the gunners situated behind the cockpit, ahead of the bomb bay and wing spars. The MG 151 cannon in the tail of the central fuselage would have been controlled with remote aiming through periscopes. There were also two remote-controlled “Fernbedienbare Drehlafette FDL 131” 13mm (remotely-controlled gun turrets) to be placed above and below the fuselage.
The Ar 340 was one of the steadily growing numbers of later-war military airframe designs designed to use the troublesome Junkers Jumo 222 engine. Otherwise an innovative design, these powerful engines were selected because they would have allowed the Arado Ar 340 to carry the required payload of 5,900 kg within a relatively compact airframe, despite their still-strictly developmental nature. As the development of the Junkers Jumo 222 engines were cancelled, plans were discussed to power the Arado Ar 340 with Daimler-Benz DB 605 liquid-cooled engines or BMW 802 radial engines. Meanwhile the RLM favoured the Junkers Ju 288 and the Arado project was not pursued.
Ultimately, the entire “Bomber B project” was cancelled, primarily as a result of the failure to develop the required engines (Ref.: 24).