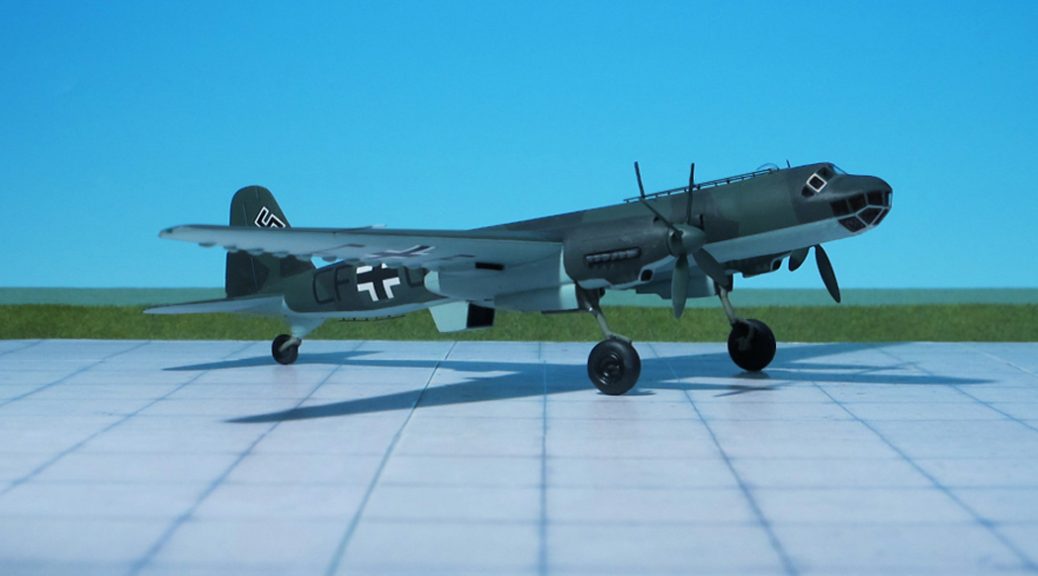 COMMENT: The Henschel Hs 130 was a high-altitude reconnaissance aircraft and bomber developed in WW II, but never used operationally, only existing as prototype airframes due to various mechanical faults.
Development of the Hs 130 began with two Hs 128 prototypes, which first flew on 11 April 1939, with the second prototype flying on 20 February 1940. Both prototypes were research aircraft, used for testing pressurized cabins, engine superchargers, and cantilever wings. Different engines powered the two prototypes; the V1 by Daimler-Benz DB 601s and the V2 by Junkers Jumo 201s. Both had fixed landing gear.
While trials of the two prototypes were not successful, the potential of a high altitude aircraft caught the attention of the commander of the Luftwaffe’s’s special reconnaissance unit. The interest in the Hs 128’s potential for high-altitude reconnaissance missions led the RLM (Reich Air Ministry) to instruct Henschel to continue development of the Hs 128 as a reconnaissance aircraft under the designation Hs 130A. Three prototype aircraft Hs 130As were built, the first flying on  May 1940. Five pre-production Hs 130A-0 followed, being delivered in early 1941, and featured Daimler-Benz DB 601R engines – each with a single-stage supercharger, retractable landing gear, and a bay in the rear to house two Rb75/30 cameras for reconnaissance. The five Hs 130A-0s subsequently underwent trials and testing, which revealed significant problems with the aircraft performance, and reliability problems which prevented operational use.
Two further modified Hs 130A-0s were produced under the designation Hs 130A-0/U6 and featured a greater wingspan, Daimler-Benz DB 605B engines, Hirth superchargers, GM-1 nitrous oxide power boosting, and under-wing drop tanks, and being ready for flight testing in November 1943, demonstrating an absolute ceiling of 50,570 ft. The Hs 130A-0/U6 variant as well as the other Hs 130A-0s proved unsatisfactory and were never flown operationally.
Further development of the Hs 130 led to bomber variants. The planned Hs 130B was almost the same as the Hs 130A, but with a bomb bay in place of the camera bay, but was never built. The Hs 130C was built as a competitor for the “Bomber B” project, and was very different from the Hs 130A, featuring a shorter wing span, remotely controlled defensive armament, a more extensively glazed but still pressurized cabin and up to 4,000 kg of bombs. Further development of the Hs 130 as a reconnaissance aircraft continued with the Hs 130D, which was planned to have DB 605 engines and a complex two-stage supercharger, but was again unbuilt.
The Hs 130E was a re-working of the Hs 130A with the “Höhen Zentrale” or “HZ-Anlage” (High-altitude gear center) in place of conventional superchargers. The “HZ-Anlage” operated by a third engine, a Daimler-Benz DB 605T, was installed in the fuselage  the only purpose of which was to power a large supercharger to supply air to the wing-mounted DB 603B engines.  Another difference from the Hs 130A was the nose, which was extended forward to offset the weight of the “HZ-Anlage” engine in the fuselage. Also underwing fuel tanks could be fitted to provide fuel for three engines, and air scoops were fitted under the fuselage to supply the fuselage engine.
Three prototype Henschel Hs 130Es were built; Hs 130E V1 first flew in September 1942, and could reach 41,010 ft when “HZ-Anlage” was employed. Hs 130E V2, first flown in November 1942, was lost on its seventh flight due to an engine fire; V3 was built to replace it. An order for seven pre-production Hs 130E-0s followed, first flying in May 1943, together with a production order was placed for 100 Hs 130E-1s which were to have a remotely controlled defensive armament and provisions for underwing bombs. The order was cancelled due to continuing problems suffered by the Hs 130E-0’s “HZ-Anlage” system. A four engine version Hs 130F was planned, which was hoped to solve the problems with “HZ-Anlage”, by using four supercharged BMW 801 radial engines, but was never built (Ref.: 24).