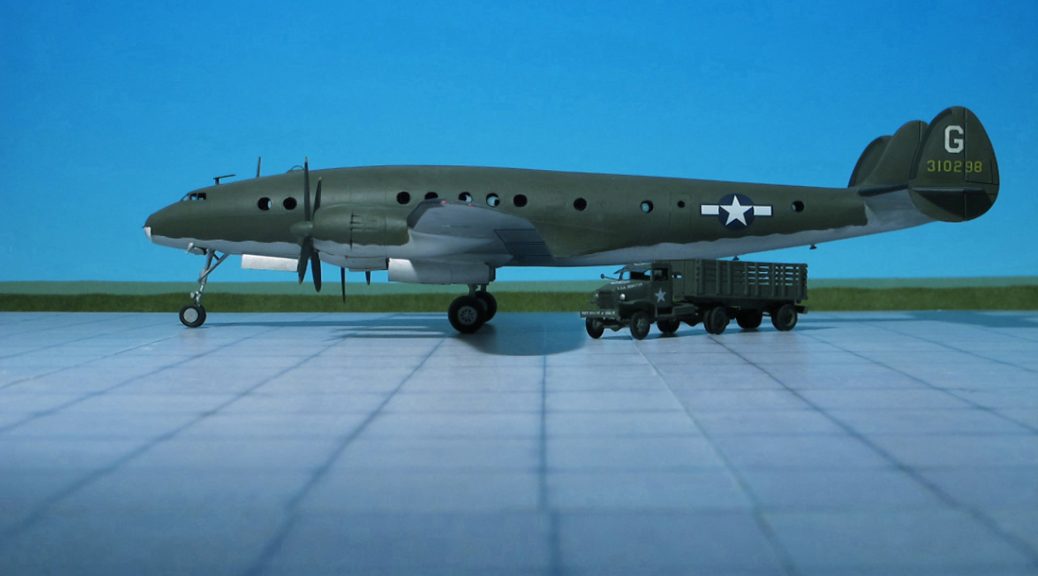 ACCOMMODATION: Crew of four plus troops or freight

COMMENT: Following the Attack on Pearl Harbor and the United States entering WWII, the assembly lines at the Lockheed Aircraft Corporation were taken over by the American government for the war effort. Along with the assembly lines, the Lockheed L-049 “Constellation” airliner was also requisitioned and designated C-69 and was to be used as a cargo and personnel transport by the United States Army Air Forces (USAAF).
Due to the direction the war was heading during summer 1942, the need for a large troop transport capable of crossing the Atlantic Ocean o Pacific Ocean (by flying from island to island) became more important. This would help avoid the risks the convoys in the Atlantic were facing due to U-Boat attacks.
The Douglas C-54 “Skymaster” planned for these roles was not completely capable. So on September 1942, the American War Department signed contract with Lockheed for nine L-049 aircraft under construction for TWA. Soon after 150 more C-69A and C-69B aircraft were ordered along with C-69C and C-69D VIP transport versions. In reality, only one C-69C was produced out of all these planned variants.
Around the same time the prototype XC-69 was completed and rolled out in December 1942. The aircraft was painted in olive green and grey camouflage colors and the civilian registration. However, problems developed with the aircraft’s powerplant, the Wright R-3350 “Duples Cyclone”. A consideration to replace the R-3350 engines with Pratt & Whitney R-2800 had been taken up.
On July 1943, the XC-69 was symbolically handed over to the USAAF and later that same day, the XC-69 returned to Lockheed for further testing. It is worth mentioning that the C-69 was able to attain a higher maximum speed than the Mitsubishi A6M “Zero” fighter.
Major problems, however, surfaced with the Wright R-3350 powerplant that powered the C-69 and  finally the USAAF ceased production of the R-3350 until the troubles that plagued the engines were solved. This caused the development of the C-69 to slow down and furthermore, the C-69 was not declared a priority. Lockheed continued to focus on building combat aircraft while the Douglas C-54 “Skymaster”, the C-69’s competitor was already flying and officially ordered.
Unfortunately for Lockheed, the C-69 became less important to the war effort as time progressed, especially since the tide of the war had turned in favor of the Allies. Only a small number of C-69 aircraft would see service in the last year of the war. Even so, Lockheed was able to conduct tests at the expense of the government to solve problems with the aircraft’s design. Although the problems with the R-3350 were being solved, the B-29 had priority for the engines over the C-69. Even with all the effort put forth by Lockheed, the USAAF favored the C-54 “Skymaster” over the C-69. At the end of the war, only 22 Lockheed C-69s “Constellations” were produced, seven of which were never delivered (Ref.: 24).