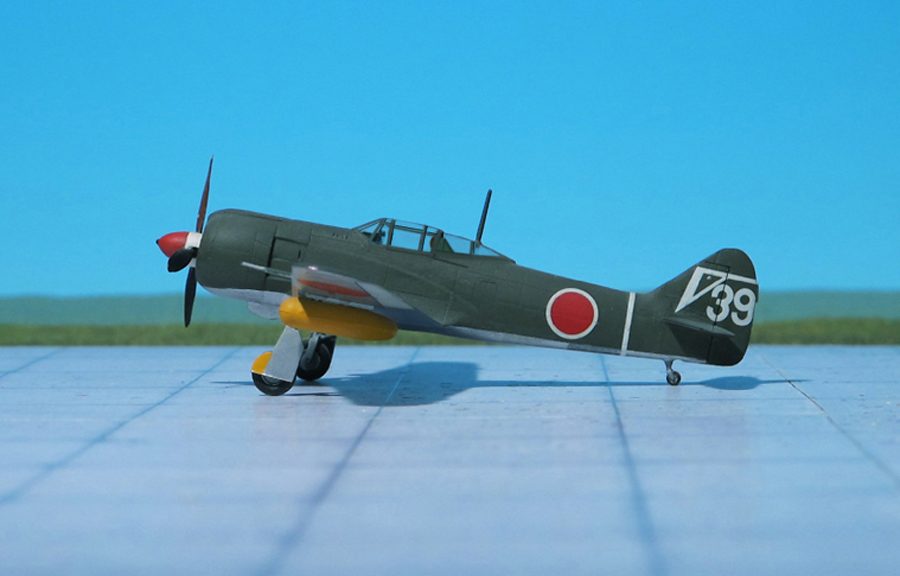 COMMENT: In mid-1944, the Kawasaki Ki-61”Hien” (Allied code “Toni”) was one of the best fighters of the Imperial Japanese Army Air Service. It was the only production Japanese fighter to have an in-line Kawasaki Ha-40 power plant, a Japanese adaptation of the German Daimler-Benz DB 601 engine, as well as the first one with factory-installed armor and self-sealing fuel tanks. It also had respectable performance, more in line with contemporary American and European designs of the time, with speed and rate of climb emphasized instead of maneuverability and range. It was an effective design, but suffered from engine shortages and reliability problems.
These problems as well as the performance advantage of enemy fighters, especially the Grumman F6F “Hellcat”, led to the development of an improved model, the Ki-61-II (later Ki-61-II-KAI), powered by the new 1,500 hp Kawasaki Ha 140 engine, which was unfortunately heavier than the Ki-61-I-KAIc it replaced. Maximum speed increased from 370 to 380 mph as well as general performance. However, it was never able to perform as planned due to the continued degradation of quality of the engine’s assembly line, with far fewer engines produced than were required, while many of the engines that were built were rejected due to poor build quality. At this point of the war, the IJAAF was in desperate need of effective interceptors to stop the enemy bomber raids over the Japanese mainland, so in October 1944 it was ordered that a 1,500 hp Mitsubishi Ha 112-II “Kinsei” (“Venus”), a 14-cylinder, two-row radial engine should be installed in those airframes. The need for the re-engined fighter was made yet more urgent on January 1945, when a Boeing B-29 “Superfortress” raid destroyed the engine’s production plant, leaving 275 finished Ki-61s without a power plant.
The Mitsubishi Ha-112-II was some lighter than the Ha-140 and produced the same power more reliably. After the study of an imported German Focke-Wulf Fw 190, an example of an aircraft in which a wide radial engine had been successfully installed in a narrow airframe, three Kawasaki Ki-61-II-KAI airframes were modified to carry this engine and to serve as prototypes.  As a result, on February 1945, the new model, Kawasaki Ki-100, was flown for the first time. Without the need for the heavy coolant radiator and other fittings required for a liquid-cooled engine, the Ki-100 was lighter than the Ki-61-II, resulting in a reduction of wing loading. This had an immediate positive effect on the flight characteristics, enhancing landing and takeoff qualities as well as imparting increased maneuverability, including a tighter turning circle.
The army general staff was amazed by the flight characteristics of the plane, which surpassed the Ki-61 in all but maximum speed (degraded by a maximum of 18 mph]by the larger area of the radial engine’s front cowling, and the model was ordered to be put in production. The company’s name was Ki-100-1-Ko. All of the airframes were remanufactured from Ki-61-II Kai and Ki-61-III airframes; the integral engine mount/cowling side panel was cut off the fuselage and a tubular steel engine mount was bolted to the firewall/bulkhead. Many of the redundant fittings from the liquid-cooled engine, such as the ventral radiator shutter actuator, were still kept. The first 271 aircraft, or Kawasaki Ki-100-1-Ko, with the raised “razorback” rear fuselage were rolled out of the factory between March and June 1945. A further 118 Ki-100 I-Otsu are built with a cut-down rear fuselage and new rear-view canopy from May through to the end of July 1945. This version also featured a modified oil cooler under the engine in a more streamlined fairing. In total 396 Kawasaki Ki-100 were built before Japan surrendered (Ref.: 24).