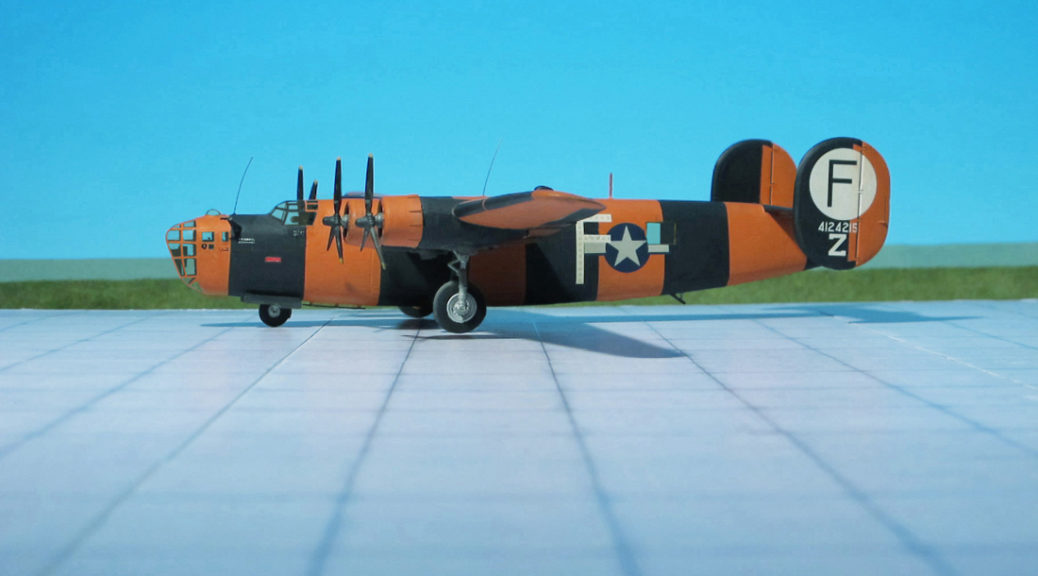 COMMENT: The Consolidated B-24 Liberator was an American heavy bomber, designed by Consolidated Aircraft of San Diego, California. It was known within the company as the Model 32, and some initial production aircraft were laid down as export models designated as various LB-30s, in the Land Bomber design category.
The B-24 was used extensively in WW II. It served in every branch of the American armed forces as well as several Allied air forces and navies. It saw use in every theater of operations. Along with the Boeing B-17 Flying Fortress, the B-24 was the mainstay of the US strategic bombing campaign in the Western European theater. Due to its range, it proved useful in bombing operations in the Pacific Area, including the bombing of Japan. Long-range anti-submarine Liberators played an instrumental role in closing the Mid-Atlantic gap in the Battle oft he Atlantic.
The Consolidated B-24D Liberator was the first mass-produced series. The B-24D was the Liberator III in British service. It entered US service in early 1942. It had turbocharged engines and increased fuel capacity. Three more 12.7 mm machine guns brought the defensive armament up to 10 machine guns. At 27,000 kg (29.76 short tons) maximum takeoff weight, it was one of the heaviest aircraft in the world.
First model produced on a large scale; ordered from 1940 to 1942, as a Consolidated B-24C with better Pratt & Whitney R-1830-43 supercharged engines. The B-24D model was initially equipped with a remotely operated and periscopically sighted Bendix belly turret, as the first examples of the Boeing B-17E Flying Fortress and some early models of the North American B-25 Mitchell medium bomber had used, but this proved unsatisfactory in service and was discontinued after the 287th aircraft. Production aircraft reverted to the earlier manually operated “tunnel” mounting with a single 12.7 mm machine. The tunnel gun was eventually replaced by the Sperry ball turret, which had also been adopted by the later Boeing B-17E Fortresses, but made retractable for the Liberator when not in use as the ventral area of its fuselage was very close to the ground on landing. In late B-24Ds, “cheek” guns mounted on either side of the forward nose, just behind the framed “greenhouse” nose glazing were added.
Between 1940 and 1945 in total 18,188 B-24 of various subtypes had been built, The number of B-24D Liberator amounted 2,696 aircraft, of which 2,381 planes were built by Consolidated, San Diego, 305 planes by Consolidated, Fort Worth, and 10 examples by Douglas, Tulsa, Oklahoma.
The Consolidated B-24D Liberator shown here, BuAer # 41-24215, was originally an aircraft of the 409th BS, 93rd BG, 8th AF in Europe and named ‘Lucky Gordon’, sometimes called just ‘Lucky’. On Aug 01th, 1943 the aircraft took part in the Ploesti oil refinery raid, diverting to Sicily, Italy. After returning to the European Theatre of Operations (ETO) and further missions it was declared war weary and renamed ‘Dogpatch Raider’ and served with the 703rd BS, as a high visibility assembly ship for the 445th BG (H), flying from RAF Tibenham, Norfolk. The large letter “F” on her fuselage, the Group’s call letter, contained bright navigation lights for dim lighting conditions (Ref.: 24).

COMMENT: The Consolidated B-24 “Liberator was a heavy long-range bomber of the USAAF during WW II and large aircraft for its day. It had a wing span of 110 feet and a gross weight of more than 30 tons. Powered by four 1,200 hp radial engines, it had a maximum fuel capacity of 2,814 US gallons and the bomb load varied from 2,000 to 4,000 kp depending on the distance of the target to be attacked. The crew varied from eight to 10 men, five or six of whom acted as gunners, manning the 10 machine guns usually carried for defence.
The operating technique with these heavy bombers was, after take-off, to assemble large formations of from 20 to 40 aircraft while climbing to operational altitude of 20,000 to 25,000 feet. This was coordinated by means of “Assembly Ships” (or “Formation Ships”) specially fitted to aid assembly of individual group formations. They were equipped with signal lighting, provision for quantity discharge of pyrotechnics, and were painted with distinctive group-specific high-contrast patterns of stripes, checkers or polka dots to enable easy recognition by their flock of bombers. The aircraft used in most cases were veteran B-24Ds. All armament and armor was removed and arrangements for signal lighting varied from group to group, but generally consisted of white flashing lamps on both sides of the fuselage arranged to form the identification letter of the group. Such an assembly was despatched from a single airfield and joined with other formations to form a division column of perhaps 500 to 600 bombers.
The 446th Bombardment Group (H) with Component Squadrons 784th, 785th, 786th and 787th Bombardment Squadron (H) was activated on 1 Aug. 1943 at Alamogordo AAFd. NM. The training for combat commenced at Kearns Fd. Utah end Aug. 43, remaining there until Nov, 43, when the group moved back to Alamogordo AAFd, NM. In early Feb. 44 the group moved to Topeka AAFd, Kan and after a week’s stay began movement to the UK. Here the group was stationed at Attlebridge, Norfolk, for the last year of the war in Europe.
Combat aircraft were Consolidated B-24H, B-24J, B-24L and B-24M. In total the group flew 232 missions in the course of the year against strategic objectives like U-boat installations in Kiel, ball bearing works in Berlin, aircraft factories in Munich and oil refineries in Hamburg. Remarkably, the 785th Bomb Squadron flew 55 consecutive missions without loss. The aircraft shown here is the assembly ship of the 446th Bombardment Group. It’s a veteran Consolidated B-24D named “Striped Ass” (Ref: 2).

Notice: Identification markings of this aircraft are mostly hand-made. After airbrushing the surface with different aluminum-silver shading red stripes are applied according to the original. For this I used microthin precision slit tape, Bishop Graphics. Inc., Westlake Village, Ca. This is self-adhesive, in red color, extreme thin and easy to apply. Unfortunately transparent it needed to be painted stripe by stripe before being applied. 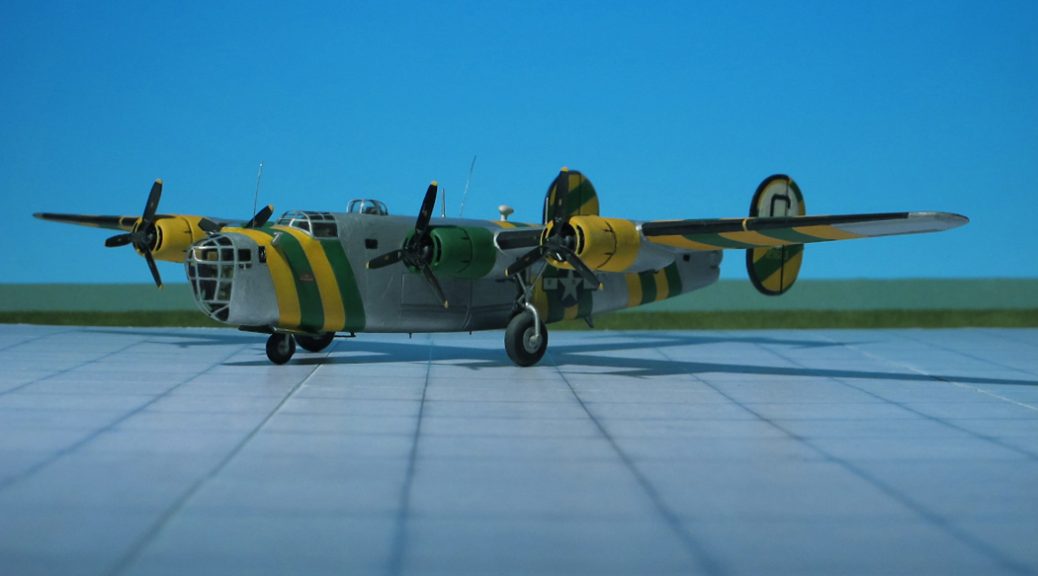 ACCOMMODATION: Crew of five to six

COMMENT: In February 1944, the 2nd Division of the Eight Army Air Force in Europe authorized the use of “Assembly Ships” (or “Formation Ships”) specially fitted to aid assembly of individual group formations. They were equipped with signal lighting, provision for quantity discharge of pyrotechnics, and were painted with distinctive group-specific high-contrast patterns of stripes, checkers or polka dots to enable easy recognition by their flock of bombers. The aircraft used in the first allocation were B-24Ds retired by the 44th, 93rd and 389th Groups. Arrangements for signal lighting varied from group to group, but generally consisted of white flashing lamps on both sides of the fuselage arranged to form the identification letter of the group. All armament and armor was removed and in some cases the tail turret. In the B-24Hs used for this purpose, the nose turret was removed and replaced by a “carpetbagger” type nose. Following incidents when flare guns were accidentally discharged inside the rear fuselage, some assembly (formation) ships had pyrotechnic guns fixed through the fuselage sides. As these aircraft normally returned to base once a formation had been established, a skeleton crew of two pilots, navigator, radio operator and one or two flare discharge operators were carried. In some groups an observer officer flew in the tail position to monitor the formation. These aircraft became known as „”Judas goats“ (Ref: 24).
The Consolidated B-24D “Liberator”, 41-23683 “Green Dragon” shown here is an assembly (formation-) ship of the 458th Bombardment Group (H) “The Sky Scorpions”, 8th USAAF, stationed at Hethel, UK from 1943 to 1945 (Ref.: 2) 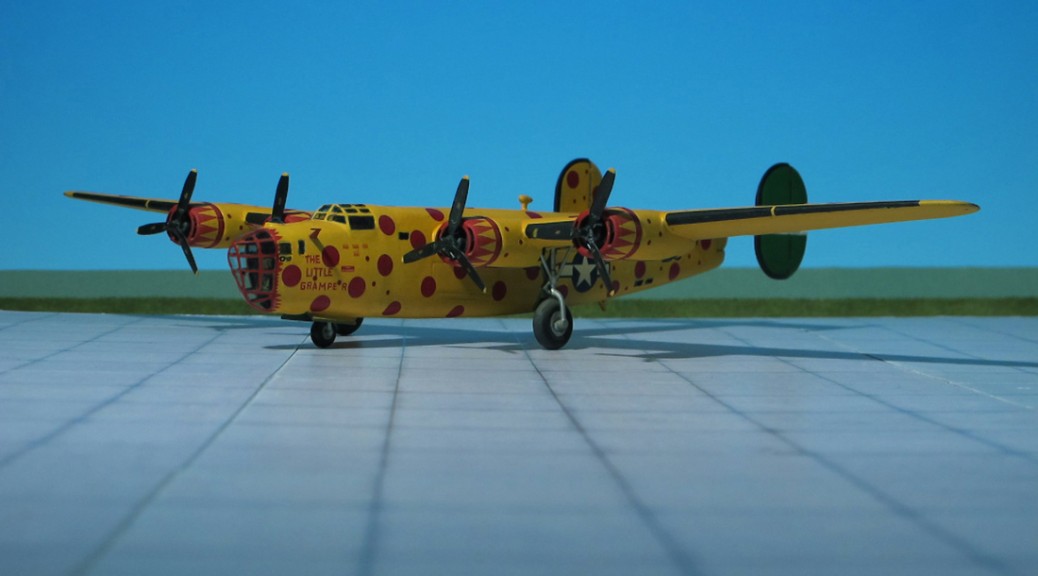 COMMENT: The Consolidated B-24D “Liberator” was the first variant to be qualified for combat. Under the original Production Pool plan, Consolidated/San Diego was the prime manufacturer, supplying components to Fort Worth and Douglas/Tulsa for assembly. In May, 1942 the first of 2,738 B-24D’s rolled off the assembly lines.
Due to rapidly changing needs, especially for defensive armament, there were many variations within the B-24D model, these differences identified by “production blocks” (e.g B-24D-70-CO). Nevertheless, B-24D’s have been very successful in the first years of bombing offensive in the European theater but later are replaced by B-24H and B-24J. These variants had more powerful engines and better defensive armament. Some bombardment groups used phased-out B-24Ds as assembly (formation) ships until the end of the hostilities. The B-24D Assembly (Formation) Ship “The Little Gramper” shown here belonged to the 491th Bombardment Group (H) „The Ringmasters“, stationed at North Pickenham. (Ref. 2)

NOTE: This model is not the Hasegawa kit. It is an Airfix kit I built many years ago. All is hand-painted direct on the model. Polka dots are used as mentioned with the Consolidated B-24J Assembly Ship of the 458th Bombardment Group (H) 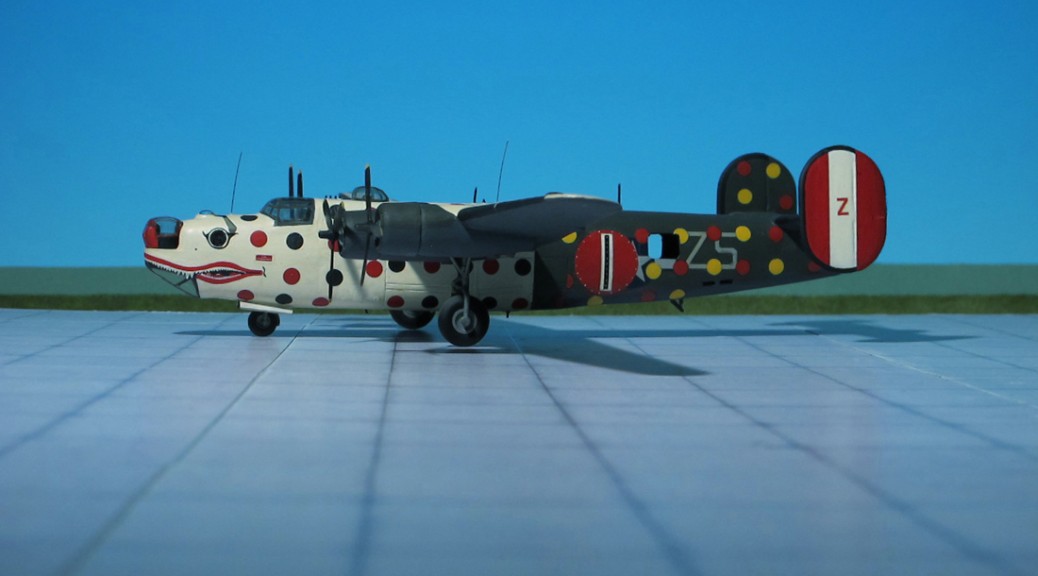 COMMENT: The Consolidated  B-24 “Liberator” was a four-engine, heavy long-range bomber designed by the Consolidated Aircraft Company in the late 1930s. For that time it was a modern design compared with its main competitor, the better-known Boeing B-17 “Flying Fortress”.  The first flight took place on December, 29th, 1939. The “Liberator” had a higher top speed, greater range, and a heavier bomb load than its rival. On the other hand the “Liberator” was more difficult to fly, with heavy control forces and poor formation-flying characteristics. Nevertheless, the B-24 provided excellent service in a variety of roles thanks to its large bomb load and long range and was used in the European as well as the Pacific campaign. When the production ended in 1945 more than 18.480 aircraft have been built, more than of all other bombers during WWII. (Ref.: 4)
The Consolidated B-24H Liberator shown here is an assembly (formation-) ship “The Spotted Ass Ape” of the 458th  Bombardment Group (H), 8th USAAF, stationed at Horsham St Faith, England. (Ref.: 2)

NOTE: This aircraft is hand-painted direct onto the models surface, except the black dots. For these Polka (donut) dots I used Bishop precut tape shapes, solid donut pads, Bishop Graphics. Inc., Westlake Village, Ca 91359 U.S.A. These are self-adhesive, extreme thin, in black, and easy to apply. More work is required to red and yellow Polka dots. Here I used the solid donut pads from the same company, but in red. Unfortunately, these are transparent. So they need to be painted dot by dot before being applied.