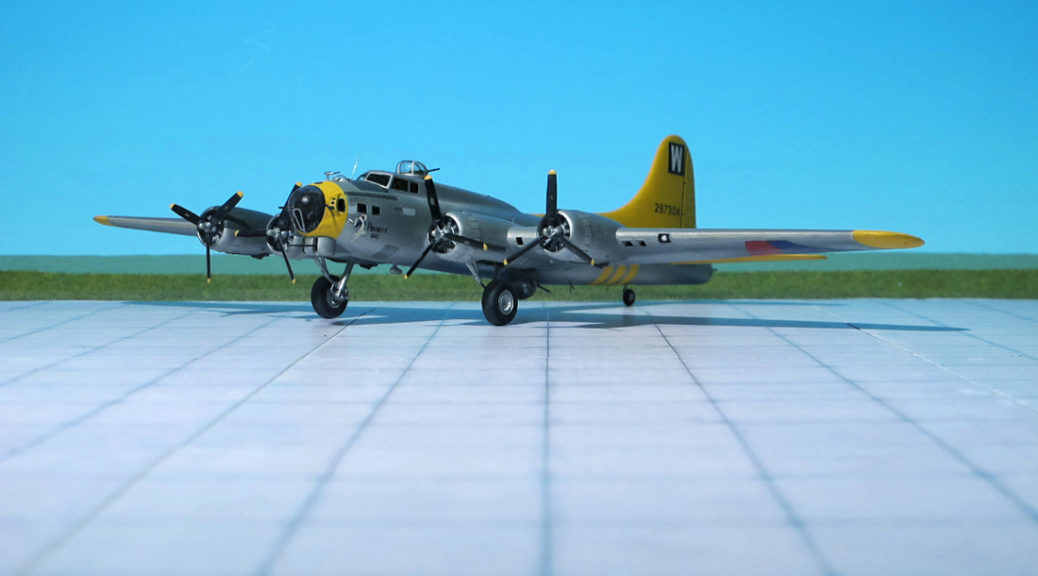 COMMENT: The Boeing B-17 Flying Fortress is a four-engine heavy bomber developed in the 1930s for the United States Army Air Corps (USAAC). From its introduction in 1938, the B-17 Flying Fortress evolved through numerous design advances becoming the third-most produced bomber of all time, behind the four-engine Consolidated B-24 Liberator and the multirole, twin-engine Junkers Ju 88,
The Boeing B-17 began operations in World War II with the Royal Air Force (RAF) in 1941, and in the Southwest Pacific with the U.S. Army. In July 1942, the first USAAF Boeing B-17Fs were sent to England to join the Eighth Air Force. Later that year, two groups moved to Algeria to join Twelfth Air Force for operations in North Africa. The B-17Fs were primarily involved in the daylight precision strategic bombing campaign against German targets ranging from U-boat pens, docks, warehouses, and airfields to industrial targets such as aircraft factories. In the campaign against German aircraft forces in preparation for the invasion of France, B-17 and B-24 raids were directed against German aircraft production while their presence drew the Luftwaffe fighters into battle with Allied fighters.
Soon, Boeing B-17Fs proved to be unsuitable for combat use over Europe. The defense expected from bombers operating in close formation alone did not prove effective and the bombers needed fighter escorts to operate successfully. Especially the head-on attacks of German fighters were dangerous, To improve defense a modification in form of a power-operated Bendix “chin” turret mounting two 0.5-in. machine guns was introduced in the last production model, the Boeing B-17G.  With the two “cheek” guns and the “chin” turret the protection against incoming fighters was increased enormously. In order to improve the field of fire to the rear a so-called “Cheyenne” tail gun mounting was fitted bringing the total number of guns from seven (B-17F) to 13 (B-17G). Incorporating all changes made to its predecessor, in total 8,680 B-17Gs were built, the last (by Lockheed) on July1945.
During World War II, the B-17 equipped 32 overseas combat groups, inventory peaking in August 1944 at 4,574 USAAF aircraft worldwide (Ref.: 24).
The aircraft shown here belonged to the 486th Bombardment Group (H), 832BS (Bombardment Squadron) stationed at Sudbury, UK. All B-17Gs were in natural metal. Group markings: W in square. In late 1944 red and blue bands forming chevron were painted on wing with blue band towards tip. From January 1945 wing tips and complete tail section painted yellow and three parallel bands of yellow round rear fuselage. In place nose bands and aircraft letter on fuselage (forward national insignia) in squadron color: 832BS in yellow, 833BS in medium blue, 834BS in red, and 835BS in bright green (Ref.: 2).