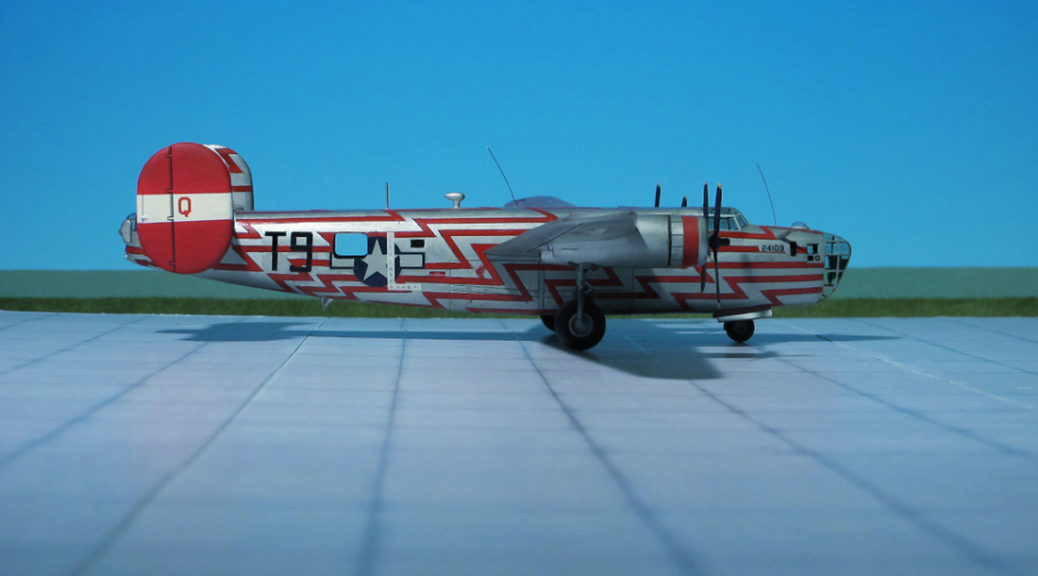 COMMENT: The Consolidated B-24 “Liberator was a heavy long-range bomber of the USAAF during WW II and large aircraft for its day. It had a wing span of 110 feet and a gross weight of more than 30 tons. Powered by four 1,200 hp radial engines, it had a maximum fuel capacity of 2,814 US gallons and the bomb load varied from 2,000 to 4,000 kp depending on the distance of the target to be attacked. The crew varied from eight to 10 men, five or six of whom acted as gunners, manning the 10 machine guns usually carried for defence.
The operating technique with these heavy bombers was, after take-off, to assemble large formations of from 20 to 40 aircraft while climbing to operational altitude of 20,000 to 25,000 feet. This was coordinated by means of “Assembly Ships” (or “Formation Ships”) specially fitted to aid assembly of individual group formations. They were equipped with signal lighting, provision for quantity discharge of pyrotechnics, and were painted with distinctive group-specific high-contrast patterns of stripes, checkers or polka dots to enable easy recognition by their flock of bombers. The aircraft used in most cases were veteran B-24Ds. All armament and armor was removed and arrangements for signal lighting varied from group to group, but generally consisted of white flashing lamps on both sides of the fuselage arranged to form the identification letter of the group. Such an assembly was despatched from a single airfield and joined with other formations to form a division column of perhaps 500 to 600 bombers.
The 446th Bombardment Group (H) with Component Squadrons 784th, 785th, 786th and 787th Bombardment Squadron (H) was activated on 1 Aug. 1943 at Alamogordo AAFd. NM. The training for combat commenced at Kearns Fd. Utah end Aug. 43, remaining there until Nov, 43, when the group moved back to Alamogordo AAFd, NM. In early Feb. 44 the group moved to Topeka AAFd, Kan and after a week’s stay began movement to the UK. Here the group was stationed at Attlebridge, Norfolk, for the last year of the war in Europe.
Combat aircraft were Consolidated B-24H, B-24J, B-24L and B-24M. In total the group flew 232 missions in the course of the year against strategic objectives like U-boat installations in Kiel, ball bearing works in Berlin, aircraft factories in Munich and oil refineries in Hamburg. Remarkably, the 785th Bomb Squadron flew 55 consecutive missions without loss. The aircraft shown here is the assembly ship of the 446th Bombardment Group. It’s a veteran Consolidated B-24D named “Striped Ass” (Ref: 2).

Notice: Identification markings of this aircraft are mostly hand-made. After airbrushing the surface with different aluminum-silver shading red stripes are applied according to the original. For this I used microthin precision slit tape, Bishop Graphics. Inc., Westlake Village, Ca. This is self-adhesive, in red color, extreme thin and easy to apply. Unfortunately transparent it needed to be painted stripe by stripe before being applied.