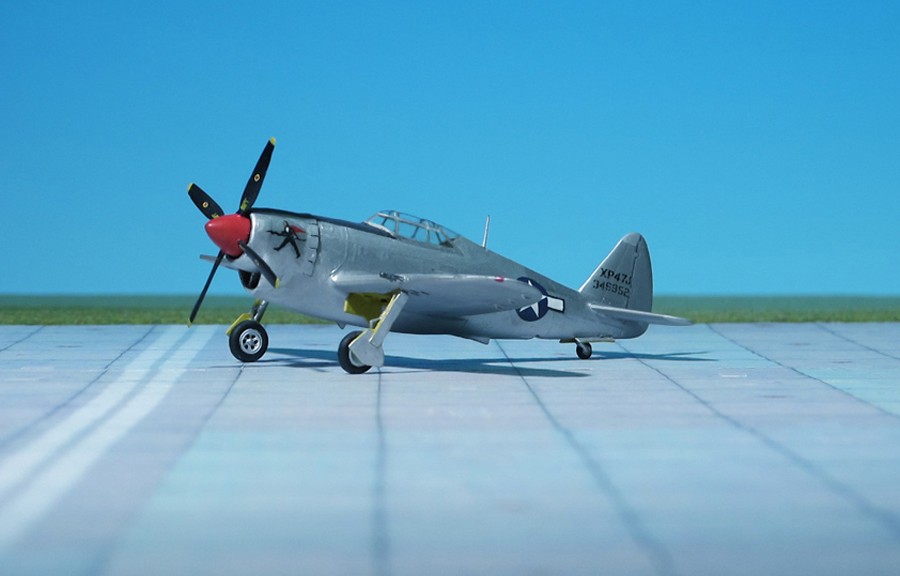 COMMENT: In 1942 studies made by Republic culminated in proposals for a “lightweight” P-47 with an improved engine installation. Construction of two prototypes was authorized, but within a few weeks it became clear to Republic and the USAAF that the more radical development of the P-47 powered by a 3,000 hp Pratt & Whitney R-4300 Wasp Major, than proceeding as the Republic P-72 held greater promise than the P-47J within a similar timescale, and work on the latter project was limited to a single XP-47J. This sole prototype had a lightened wing structure, a more powerful variant of the R-2800 radial engine, driving a four-bladed propeller with a large spinner and a fan to assist the flow of cooling air through a narrow annulus around the spinner. A separate intake scoop beneath and behind the engine cowling provided air for the General Electric CH-5 supercharger in the rear fuselage. The first flight was made in November 1943, and on August 1944 a speed of 505 mph was recorded, at 34,450 ft. This was the highest known speed achieved up to that time in level flight by a propeller driven aircraft and established the XP-47J as one of the few such aircraft to have broken through the 500-mph “barrier” (Lit.: 9).