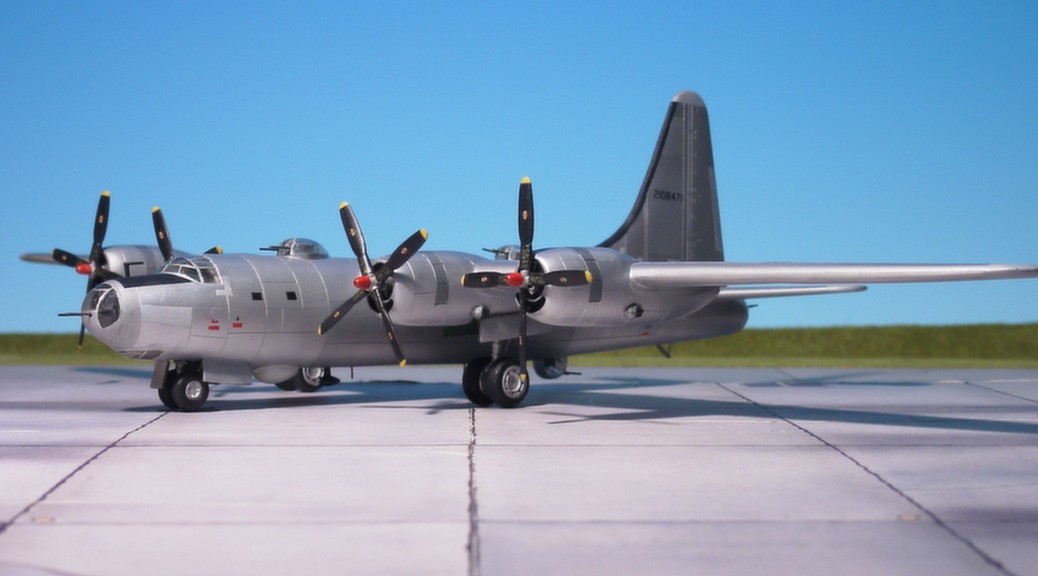 COMMENT: The Consolidated B-32 “Dominator” was a heavy bomber made for the USAAF  during WWII, and had the distinction of being the last Allied aircraft to be engaged in combat during World War II. It was developed in parallel with the Boeing B-29 “Superfortress” as a fallback design should the B-29 prove unsuccessful. The design on which Consolidated based its proposal was similar to the Consolidated B-24 “Liberator”. Like the B-24 it was originally designed with twin fins and a large Davis-type wing, but with a longer, rounder fuselage and a rounded nose. The aircraft was designed to be pressurized, and have remote-controlled retractable gun turrets with fourteen .50 in machine guns. The turrets were remotely controlled from periscopic sights in aiming stations inside the aircraft. The sights were coordinated by a sophisticated analog computer system. The inboard propellers’ pitch could be reversed to shorten the landing roll or to roll back in ground maneuvers. The first prototype made its maiden flight on 7 September 1942. In 1943, the initial contract was signed for 300 B-32 but development problems continued. In order to resolve stability problems a B-29 style tail was fitted to the aircraft after its 25th flight. But this did not resolve the problem and a Consolidated-designed 19.5 ft vertical tail was added and first flown on the third XB-32 on 3 November 1943. By 1944 testing of the three prototypes permitted the USAAF to place orders for over 1,500 B-32s. The first production aircraft was delivered on 19 September 1944, by which time the B-29 was in full combat in the Pacific Area of Action. Beginning on 27 January 1945, 40 B-32A-5, -10 and -15 aircraft were delivered as unarmed TB-32-CF crew trainers. The B-32 only reached units in the Pacific Area during mid-1945, and subsequently only saw limited combat operations against Japanese homeland  before the end of the war. Most of the extant orders of the B-32 were cancelled shortly thereafter and only 118 B-32 airframes of all types were built (Ref.: 23).