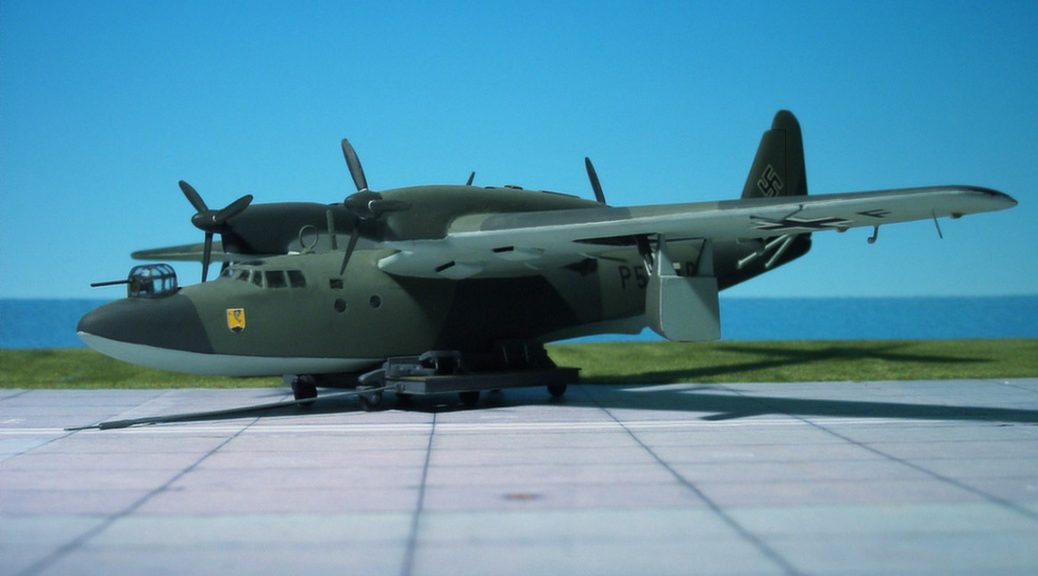 COMMENT: The elegant Dornier Do 26, sometimes referred to as the “most beautiful flying-boat ever built”, was of all-metal construction. Originally designed as a civilian transport aircraft for the “Deutsche Lufthansa”, the few aircraft built before  and immediately at the beginning of WW II were pressed into military service at the outbreak of the war in Europe.
The hull had a central keel and a defined step; the wings were of gull wing configuration, the outer sections being equipped with fully retractable narrow stabilizing wing-floats, instead of Dornier’s famous “water-wing” sponsons extending from the lower hull for lateral stabilization.
Its four Junkers Jumo 205 diesel engine, were mounted in tractor/pusher pairs in tandem nacelles located at the joint between the dihedral and horizontal wing sections. The rear (pusher) engines could be swung upwards through 10° during take-off and landing, to prevent contact between the three-blade airscrew and water spray created by the forward propellers. The tail unit was of conventional design, comprising a horizontal tail-plane and a single, vertical fin with rudder. Armament consisted of one 20 mm MG 151/20 cannon in a power-operated bow turret and three 7.92 mm MG 15 machine guns.
Only six aircraft were built and put into Luftwaffe service. They were used in the Norwegian campaign for transporting supplies, troops and wounded to and from the isolated German forces fighting at Narvik. During this campaign three of them were lost. Another Dornier Do 24C was lost on 16 November 1940, killing its crew, after being launched at night from the catapult ship “Friesenland” in Brest, France. The fate of two remaining aircraft, which in 1944 were still assigned to the “Erprobungsstelle” (Test Unit) in Travemünde, Germany, is unclear (Ref.: 24).