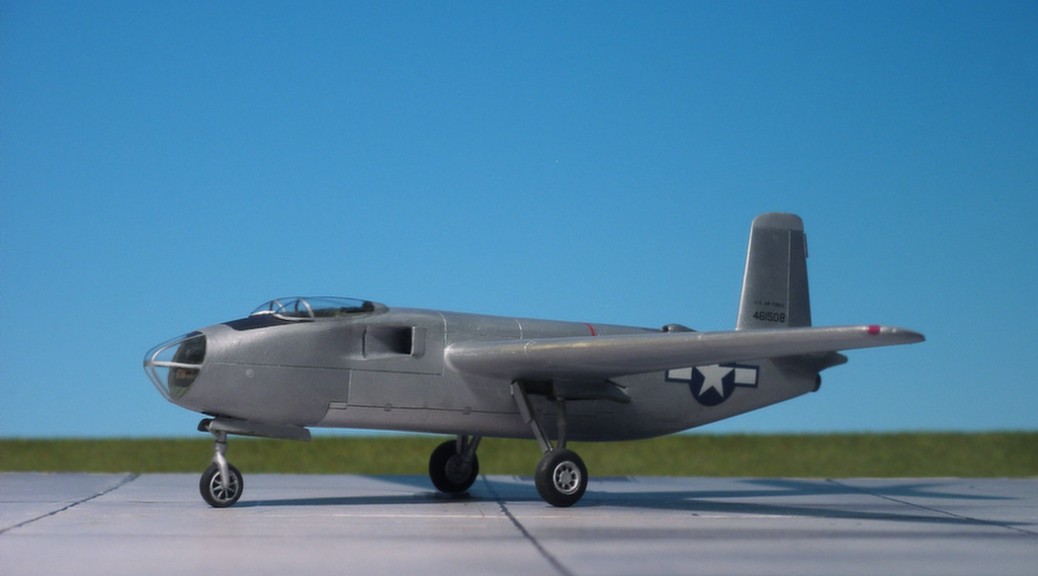 COMMENT: USAAF leaders in the Air Material Command began to consider the possibilities of jet-propelled bombers as far back as October 1943. At that time, Douglas Aircraft was just beginning to design a promising twin-engine bomber designated the XB-42 “Mixmaster”. Reciprocating engines powered this aircraft but they were buried in the fuselage, leaving the laminar flow-airfoil wing clean of any drag-inducing pylon mounts or engine cowlings. The airframe appeared ideally suited to test turbojet propulsion. Douglas confirmed the feasibility of the concept and the USAAF amended the XB-42 contract in March 1944 to include the development of two turbojet-powered XB-43 prototypes, reduced from an initial order of 13 test aircraft. The Douglas design team convinced the Army that modifying the XB-42 static test airframe into the first XB-43 was a relatively straightforward process that would save time and money compared to developing a brand new design. Douglas replaced the two Allison V-1710 engines with a pair of General Electric J35 turbojets, then cut two air intakes into each side of the fuselage, aft of the pressurized cockpit. Removing the propellers and drive shafts freed enough space for two long jet exhaust ducts. Without any propellers present, there was no chance of striking the blade tips on the runway, so the entire ventral fin/rudder unit of the earlier XB-42’s full four-surface cruciform tail was omitted. Douglas compensated for the loss of yaw stability by enlarging the dorsal fin/rudder unit. The end of World War II caused a general slowdown within the aviation industry and General Electric was late delivering the engines. So America’s first turbojet bomber finally flew for the first time on 17 May 1946. Douglas Aircraft was keen to mass-produce the new bomber and the USAAF considered ordering 50, but these plans never became realized. The USAAF was already moving ahead with a new bomber, the North American XB-45 “Tornado”, designed from the outset for turbojet power and promising a quantum leap in every category of performance (Ref.: 24).