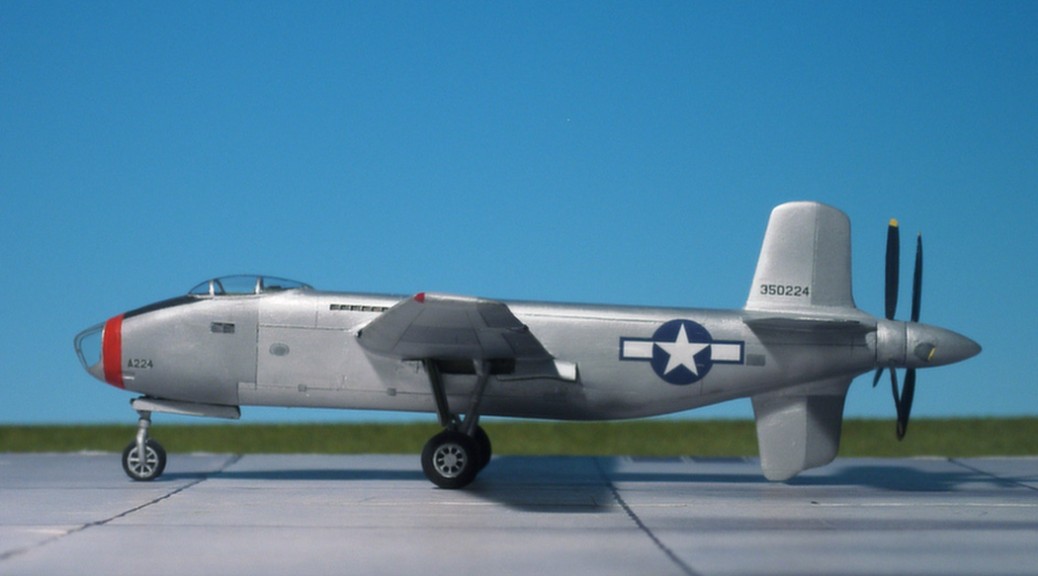 COMMENT: The XB-42 was developed initially as a private venture; an unsolicited proposal was presented to the USAAF in May 1943. This resulted in a contract for two prototypes and one static test airframe, the USAAF seeing an intriguing possibility of finding a bomber capable of the Boeing B-29 “Superfortress” range without its size or cost. The aircraft mounted a pair of Allison V-1710-125 liquid-cooled V-12 engines behind the crew’s cabin, each driving one of the twin propellers. Air intakes were in the wing leading edge. The landing gear was tricycle and a full, four surface cruciform tail was fitted, whose ventral fin/rudder unit prevented the coaxial propellers from striking the ground. The pilot and co-pilot sat under twin bubble canopies, and the bombardier sat in the extreme front behind a plexiglass nose. Defensive armament was two 0.50 in machine guns each side in the trailing edge of the wing, which retracted into the wing when not in use. These guns were aimed by the copilot through a sighting station at the rear of his cockpit. The guns had a limited field of fire and could only cover the rear, but with the aircraft’s high speed it was thought unlikely that intercepting fighters would be attacking from any other angle. The first XB-42 was delivered to the Army Air Force and flew at on 6 May 1944. Performance was excellent, being basically as described in the original proposal: as fast or even faster than the de Havilland “Moquito” but with defensive armament and twice the bomb-load. The end of World War II allowed the Air Force to consider possibilities with a little more leisure. Although with the second prototype additional Westinghouse 19XB-2A jet engines were mounted under the wings to enhance performance (XB-42A) it was decided to wait for the development of better jet bombers rather than continue with the XB-42 program (Ref.: 24).