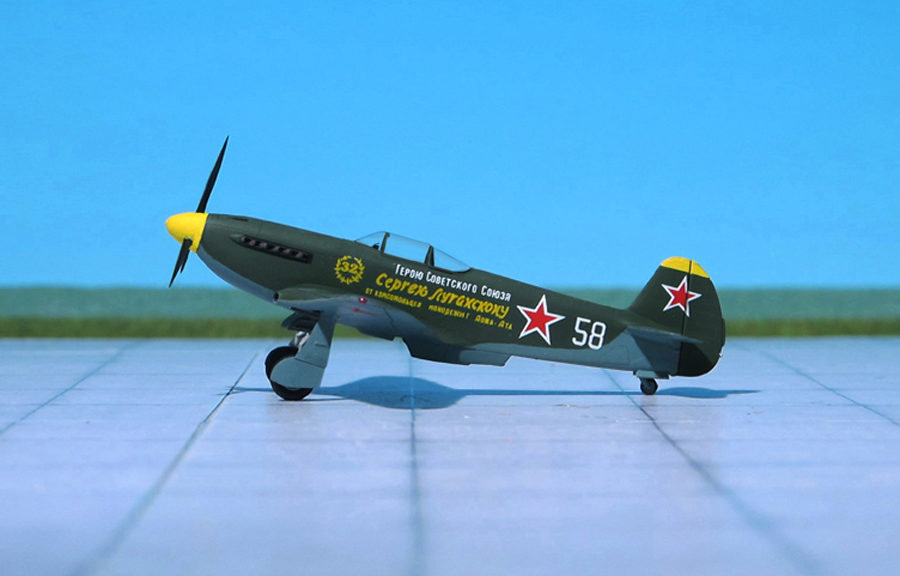 COMMENT: The Yakovlev Yak-3 was a single-engine single-seat WW II Soviet front line fighter aircraft. Robust and easy to maintain, it was much liked by pilots and ground crew alike. It was one of the smallest and lightest major combat fighters fielded by any combatant during the war. Its high power-to-weight ratio gave it excellent performance. It proved a formidable dogfighter.
The origins of the Yak-3 went back to 1941 when the I-30 prototype was offered along with Yakovlev I-26 (Yak-1) as an alternative design. The I-30, powered by a Klimov M-105P engine, was of all-metal construction, using a wing with dihedral on the outer panels. Like the early Yak-1, it had a 20 mm ShVAK cannon firing through the hollow-driveshaft nose spinner and twin 7.62 mm synchronized ShKAS machine guns in cowl mounts ahead of the cockpit on the fuselage, but was also fitted with a ShVAK cannon in each wing. The first of two prototypes was fitted with a slatted wing to improve handling and short-field performance while the second prototype had a wooden wing without slats, in order to simplify production. The second prototype crashed during flight tests and was written off. Although there were plans to put the Yak-3 into production, the scarcity of aviation aluminum and the pressure of the German invasion led to work on the first Yak-3 being abandoned in late fall 1941.
In 1943, Yakovlev designed the Yak-1M which was a lighter version of the Yak-1. It incorporated a wing of similar design, but with smaller surface area and had further aerodynamic refinements, like the new placement of the oil radiator, from the chin to the wing roots (one of the visual differences with the Yak-1, -7, -9). A second Yak-1M prototype was constructed later that year, differing from the first aircraft in that it had plywood instead of fabric covering of the rear fuselage, mastless radio antenna, reflector gunsight and improved armor and engine cooling. The chief test pilot for the project P. M. Stefanovsiy was so impressed with the new aircraft that he recommended that it should completely replace the Yak-1 and Yak-7 with only the Yak-9 retained in production for further work with the Klimov VK-107 engine. The new fighter designated the Yak-3 entered service in 1944, later than the Ya-9 in spite of the lower designation number.
The first 197 Yak-3 were lightly armed with a engine-mount 20 mm ShVAK cannon and one 12.7 mm UBS- synchronized machine gun, with subsequent aircraft receiving a second UBS for a weight of fire of 2.72 kg per second using high-explosive ammunition. All armament was installed close to the axis of the aircraft (cannon mounted in the engine “vee”, and firing through the propeller boss; and synchronized machine guns in the fuselage above the engine), adding to the accuracy and leaving wings unloaded.
Production accelerated rapidly, so that by mid-1946, 4,848 had been built. Before the end of the war it was also flown by Polish Air Forces (of the Polish People’s Army formed in USSR) and after the war ended, it was flown by the Yugoslav Air Force (Ref.: 24).