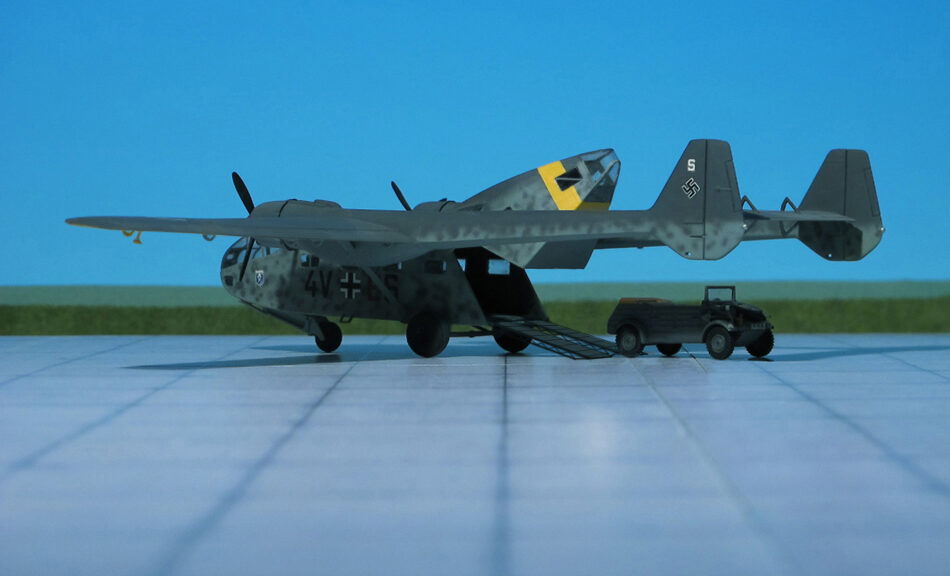 ACCOMMODATION: One or two pilots, up to 23 troops or freight

COMMENT: The Gotha Go 244 was a transport aircraft used by the German Luftwaffe during World War II.
From an early design stage of the Gotha Go 242 transport glider, consideration was given tot he possibility of introducing a degree of „motorization“, either on a temporary or permanent basis, both to simplify the retrieval of empty gliders from forward airstrips and to provide a transport capable of operating out of fields too small for towplane-glider combinations. Numerous project studies were prepared, these ranging from the temporary application of a single engine which could be „bolted on“ after the Go 242 had performed its supply mission, enabeling the empty glider to return to its base under ist own power, to the permanent installation of one or more power plants to remove entirely the aircraft’s dependence on towplanes.
An early proposal for temporary „motorization“ of the glider envisaged the provision of an Argus As 10C air-cooled engine complete with oil tank, oil cooler and firewall as a „power egg“ which could be attached to the nose of the Go 242 by means of four bolts. The scheme envisaged the Go 242 being employed as an orthodox tranport glider for the supply mission. After landing and being unloaded, the glider was to have the As 10C „Power egg“ bolted to the nose of the fuselage and in this form it was expected to be capable of returninjg to base without assistance. This and several similar proposals failed to find approval with the RLM, but the projected installation of a pair of air-cooled radial engines in the 500 – 750 hp category on a permanent basis was accepted, and during early summer 1942 the Gotha Waggonfabrik adapted several Go 242B airframes to test various types of air-cooled radial engines as prototypes for the Go 244.
The first prototype, the Go 244 V1 was powered by two 660 hp BMW 132 radials, while the second prototype had  two 700 hp Gnome-Rhone 14Ms and the third two 750 hp Shwetsov M-25 A radial engines, with this model of Shvetsov OKB engine design being essentially a Soviet-built Wright Cyclone American-based nine-cylinder radial. Although only the third prototype offered adequate engine out performance, the Luftwaffe had large stocks of captured French Gnome engines, so this was chosen as the basis for the production conversion — usually fitted in counter-rotating pairs in production — although a few more aircraft were fitted with the BMW and Shvetsov engines.
The Go 244B series was the main production model, being based on the Go 242B with a wheeled tricycle undercarriage and with fuel and oil carried in the tailbooms. 133 aircraft were converted from Go 242 Bs, while a further 41 were built from new before production reverted to the glider Go 242.
The first examples of the Go 244 were delivered to operational units in Greece, based in Crete in March 1942. Some were also assigned to Transport Geschwader in North Africa and the Eastern Front but on the former front they proved vulnerable to anti-aircraft fire and were withdrawn, being replaced by Junkers Ju 52 or Messerschmitt Me 323 Gigant aircraft.
The Go 244B was decidedly underpowered and was incapable of remaining airborne on one engine othe than empty conditions (Ref.: 7, 24).