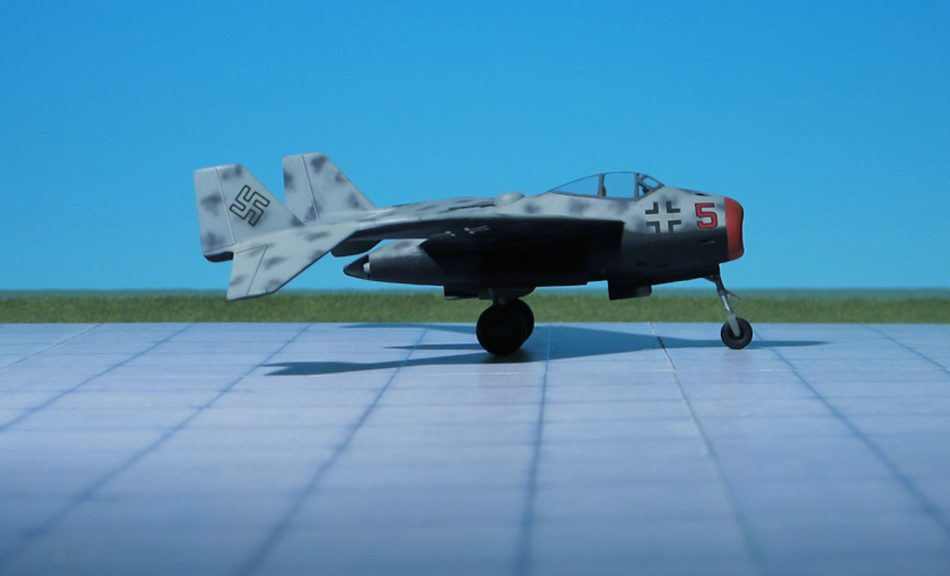 COMMENT:  A specification for a night fighter was issued by the RLM in late January 1944. Preliminary requirements postulated a top speed of 560 mph, an endurance of four hours, an internally mounted FuG 240 or FuG 244 radar, and an armament consisting of four cannon. Dr. Richard Vogt, chief engineer of Blohm & Voss Company, who designed the Blohm & Voss Bv P.212 jet fighter, contender of the “Jägernotprogramm” (Fighter emergency program), immediately began work of an larger aircraft to meet the specification issued for the new night fighter. On the basis of the Bv P.212 he designed the new aircraft, officially designated Blohm & Voss Bv P.215. The fuselage was short with an air intake in the nose leading the flow directly to the turbojet engines mounted in the rear fuselage. The wings featured a 30 degree swept back and 6 degrees of dihedral. The outer wing tips angled down at 23 degrees, and assisted stability and control. There were two small vertical fins and rudders located on the trailing edge of the wing, where the outer wing tips angled down. The nose landing gear was taken from a Heinkel He 219 “Uhu” and retracted to the rear, and the two main wheels retracted forwards into the fuselage. A pressurized cockpit held the three man crew seated on ejection seats. The defensive armament consisted on a remote controlled, rear-facing FHL 151 turret and two MG 151/20 cannon. Two bombs, SC 250 or SC 500 could be carried in a belly recess. On February 1945, the specifications for the future night fighter were upgraded, which none of the competitor’s designs were able to achieve. Although the Blohm & Voss Bv P.215 would have had good performance characteristics, it did not reach the new specifications either. Criticism concerned the short time of flight, stall at high speeds, caused by the short and thick fuselage, and uncertainty due to the unusual control units. Nevertheless, in March 1945, the design was chosen for further development. With the collapse of Nazi Germany any further work on that novel aircraft were stopped (Ref.: 17, 22).