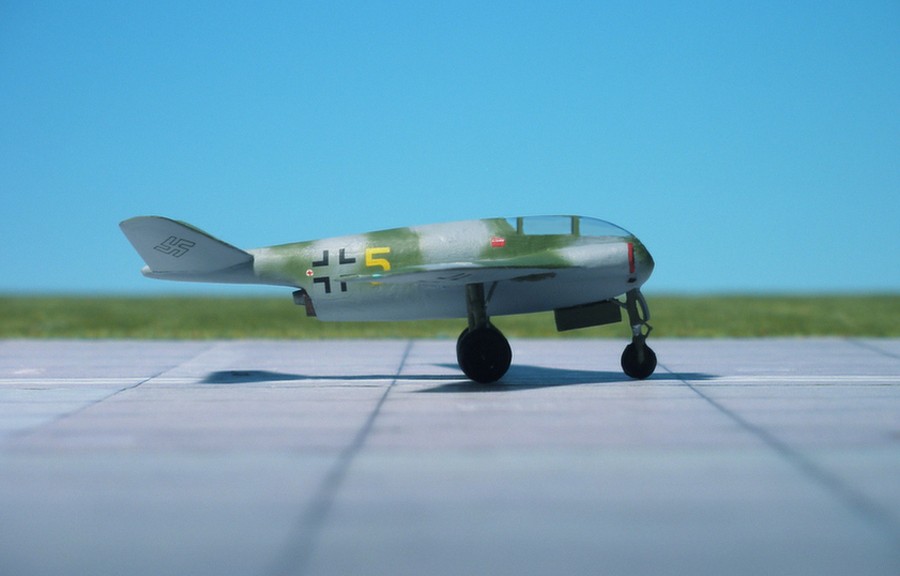 COMMENT: On July 15, 1944, the RLM submitted Proposal 226/II to Germany’s aircraft manufacturers. This “Emergency Fighter Competition” specified the following requirements for the second-generation of jet-powered fighters: powered by a single Heinkel-Hirth He S 011 turbojet, maximum speed of 621 mph at 22,966 feet, fuel capacity 30 minutes of sea level flying time, altitudes up to 45,931 ft, four MK 108 30mm cannon, and pressurized cockpit. Immediately Messerschmitt began to design the project Me P.1101 and nine days later the first blueprints were on the drawing board. The fuselage was short and wide, the cockpit was forward mounted, with the canopy integrated into the fuselage and forming part of the rounded nose of the aircraft. Two round air intakes on either side of the cockpit fed the single Heinkel-Hirth turbojet engine which was located in the lower rear fuselage. Mid-mounted wings had an inner sweep of 40 degree near the fuselage, and a shallower 26 degree outboard. The high tail was of a butterfly configuration, and was mounted on a tapered boom which extended over and past the jet exhaust. A tricycle landing gear was provided and the main armament of four cannon was located in the lower forward fuselage sides. Already on August 30, 1944, a new design was proposed, basically similar to the Me P.1101/13, but sleeker and a more pointed nose. The wing was “borrowed” from the Me 262 outer wing, was swept back at 40 degrees, and a V-tail was also to be fitted. As early as November 1944 the initial design phase of the final variant was started and simultaneously the construction of a prototype began resulting in the Messerschmitt Me P.1101 V1 (Ref.: 16).