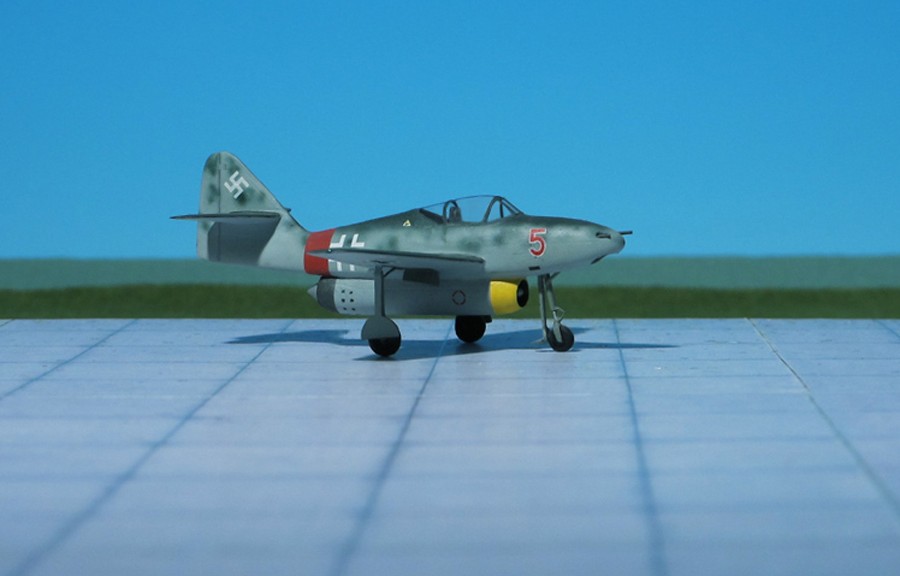 COMMENT: In spring 1943, the Messerschmitt design bureau was working on several designs of different single engine, lightweight turbojet fighters. These were the P.1092A-E, and further variants P.1092/2, P.1092/3, P.1092/4, and P.1092/5. At the same time, the Argus pulse jet powered Messerschmitt Me 328 was also under development. Of all these projects only seven prototypes of the Me 328 were built and flight tested. But the results of these tests as well as calculations of all the P.1092 variants were incorporated into a new design, internal designation Me P.1095. In order to cut down the development and retooling time the design team decided to use as many existing components from other aircraft as possible.  The first P.1095 design of October 1943 was proposed in two versions. All used the same fuselage and the power was provided by a single Junkers Jumo 004B jet engine, located below the fuselage. This had the advantage of being easily serviced, but the drawback of the possibility of the ingestion of foreign matter into the intake on take-off. The two variants differed only in wings and tail-plane configuration. One was to use the entire Messerschmitt Me 262 tail unit  with horizontal tail and fin/rudder along with a wooden wing, the other used the entire Me 328 tail unit with horizontal tail and fin/rudder along with a slightly smaller all metal wing. The undercarriage was of a tricycle design, and the main wheels retracted, and were also taken from the Messerschmitt Me 309. A forward retracting nose gear was located in front of the engine intake.  The P.1095 project was discontinued in early 1944, due to the fact that the engine location was felt to be disadvantageous, and the performance was less than the Me 262 twin jet fighter, which was about to come into service (Ref.: 17, 22).