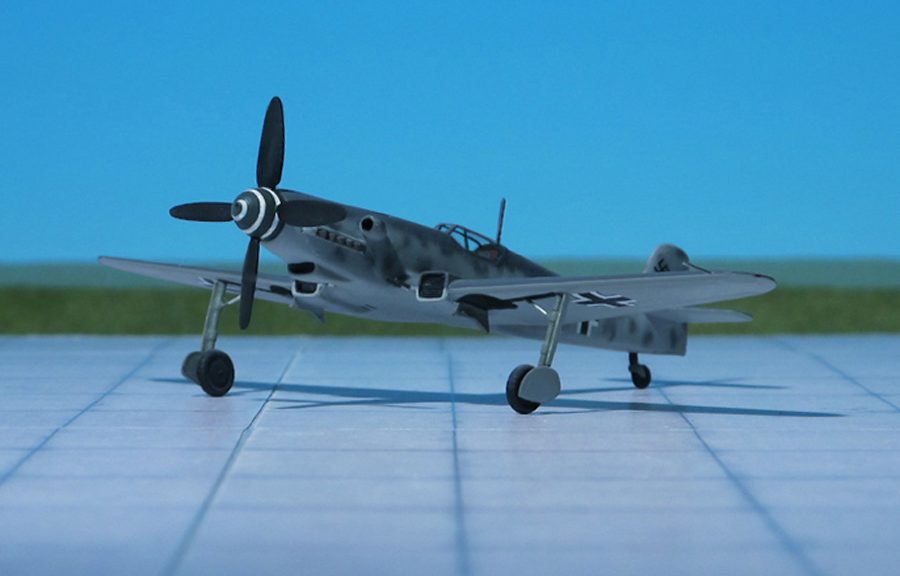 COMMENT:  In April 1943 the Messerschmitt design bureau submitted proposals for a high-altitude fighter designated Messerschmitt Me 209H. This project envisaged the insertion of an additional rectangular center section in the wing to increase overall span and gross area, and the use of either Daimler-Benz DB 628A high altitude engine or the DB 603U which was a DB 603E equipped with a TKL 15 turbo-supercharger. Owing to the time element Messerschmitt was instructed to embody some of its proposals for the Me 209H into the Me 109H which, making extensive use of Me 109G components, offered a quicker solution to the requirement for a fighter of superior altitude capability.
Nevertheless, the Messerschmitt bureau persisted with the development of the Me 209H, detail design being completed on October 1943, and work on the prototype, the Me 209H V1, began shortly afterwards, but proceeded slowly, and was delayed as a result of an air attack in February 1944 in which the partly assembled prototype was damaged, and some of its components destroyed. Thus, the Me 209H V1 was not rolled out until June 1944, by which time the entire Me 209 program had been officially abandoned. It had been intended that the Me 209H V1 should receive the Daimler-Benz DB 627 which was basically a DB 603 G with aftercooler and two-stage mechanical supercharger, and afforded 2,000 hp for take-off. The engine drove a four-bladed wooden airscrew and the annular radiator was discarded in favor of radiators in the leading edge of the wing center section. No records exists of the results of flight testing or the ultimate fate of the sole Me 209 high-altitude prototype (Ref.: 7).