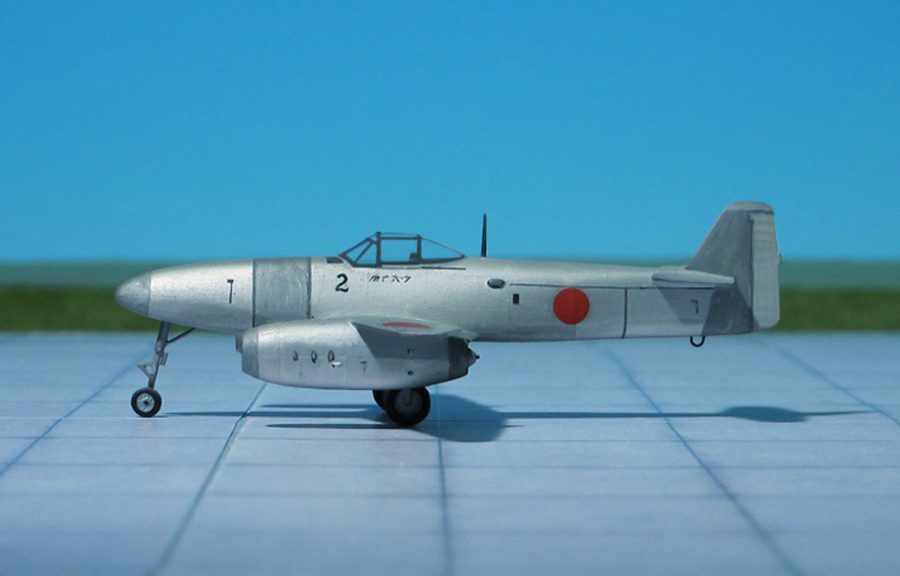 COMMENT: Design work on the Nakajima J8N “Kitsuka” (“Kikka”) – the only Japanese turbojet powered aircraft capable of taking-off on its own power, albeit only twice during World War II – began in September 1944. The enthusiastic reports on the progress of the Messerschmitt Me 262 twin-jet fighter received from the Japanese Air Attaché in Germany had prompted the Naval Staff to instruct Nakajima to design a single-seat twin-jet attack fighter based on the German Me 262.
The aircraft externally resembled the Me 262 but was smaller. Two turbojets were mounted in separate nacelles under the wing to allow the installation of engines of various types. Provisions were made for folding wings, to enable the aircraft to be hidden in caves and tunnels and also for ease of production by semi-skilled labor. Initial plans to power the aircraft by two N-12 turbojet engines each delivering 340 kp thrust were refused due to insufficient thrust. Fortunately, photographs of the German BMW 003 axial-flow turbojet had been obtained and from these the Japanese were able to design a similar turbojet, designate Ne-20, offering a thrust of 475 kp.
Completed in August 1945, the first “Kikka” made its maiden flight. Four days late the pilot aborted a take-off during the second flight, the accident being caused by mounting the two rocket-assisted-take-off (RATO) rockets at an incorrect angle. A second prototype (shown here) was almost ready for flight trials and eighteen additional prototypes and pre-production aircraft were ready in various stages of assembly when with the end of WW II the development of the aircraft was terminated (Ref.:  1).