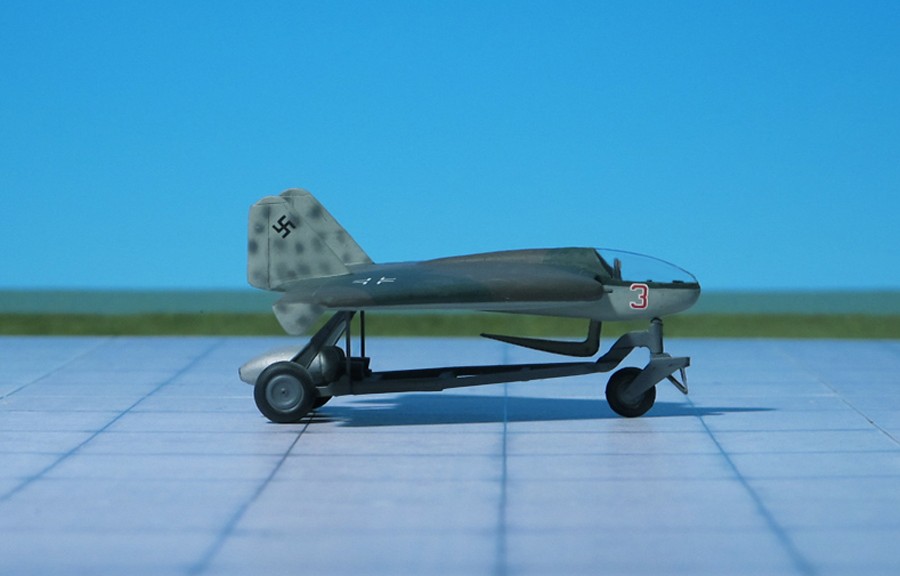 COMMENT: The Lippisch Li P.13b was a follow-on design from the Lippisch Li P.13a, and was also a ramjet fighter. Designed in December 1944, it featured Lippisch’s favorite wing plan, a delta design (sweepback was 60 degrees) with downturned wingtips. A double fin and rudder was chosen to provide steady flight, and the cockpit was moved forward for better pilot’s visibility, ahead of the delta wing’s apex. On each side of the cockpit on the wing’s leading edge were the air intakes which fed the ramjet. For take-off a liquid-fuel rocket driven trolley was used; additional rockets were necessary to accelerate the aircraft to speed for operating of ramjets. The main landing gear was a retractable landing skid, and the rear rested on the reinforced downturned wingtips. No armament was planned at this stage. Because of the fuel shortage in Germany at this stage in the war, an ingenious plan to use coal (or paraffin coated lignite dust) for fuel was to be tried. A centrally installed round or hexagonal heat-resistant ceramic combustion chamber was fitted in the interior of the wing, and was fillable from above. No tests were ever carried out with this design or with the unique power source and the project only stayed in stage of concept sketches on the drawing board (Ref.: 16).