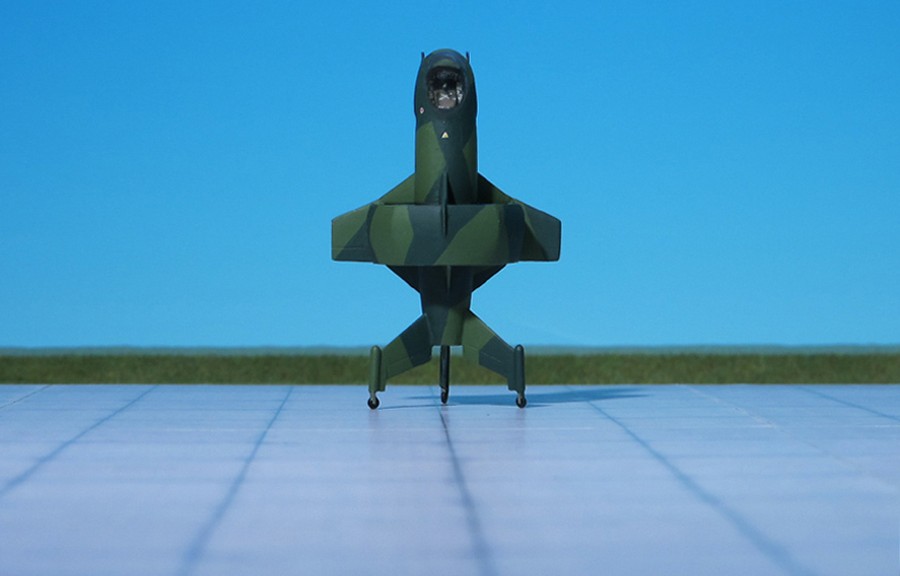 ACCOMMODATION: Pilot only, in seated position

COMMENT: The Heinkel “Wespe” (“Wasp”) was designed in late 1944 as a Vertical Take-Off and Landing (VTOL) interceptor. It should be used as a “Punktverteidiger” (Target defense interceptor) to protect factory complexes and military facilities which only had small or no airfields. The idea goes back to early 1939, when Werner von Braun proposed a rocket driven aircraft (Braun fighter) that should vertically take-off from a truck on two guide rails. Although the scheme was discarded as impracticable by the RLM, later during the war the Fieseler Company prepared a series of interceptor design studies under the generic designation Fieseler Fi 166 (a rocket-driven aircraft on the tip of a Aggregat 4  (A4, better known as V2) as booster. Finally, in late spring 1944, the RLM issued a requirement for a small and inexpensive target-defense interceptor that led to the development of the Bachem Ba 349 “Natter”(Colubrid). Other companies followed such as the Heinkel Company with projects like He P.1077 “Julia I” and “Julia II”, or the propeller-driven VTOL-projects “Wespe” (Wasp) and “Lerche II” (“Lark”), or Focke-Wulf with its Fw “Treibflügeljäger”  (thrust-wing fighter).

To the Heinkel “Wespe”. The aircraft was designed around a circular wing, with small wing tips protruding beyond the circular wing at the two lower wing support locations.  A single Heinkel-Hirth HeS 021 turboprop, rated at 2,000 horsepower plus 750 kp thrust, was fed by an air intake located below the cockpit.  The “Wespe” took off and landed on three landing gear, the pilot sat in a normal seated position in the nose under a huge blown canopy, and two MK 108 30mm cannon mounted in blisters on each side of the cockpit were envisioned for the armament. Further development was abandoned due to the approaching war’s end. A more aerodynamic VTOL interceptor project, the Heinkel “Lerche” (Lark) was on the drawing board (Ref. 16, 17).