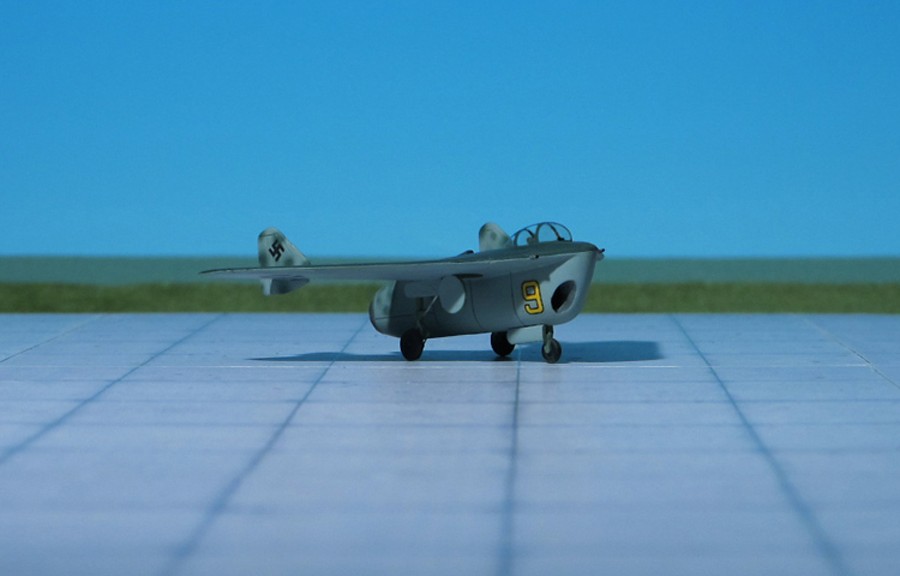 COMMENT: End of 1943, the Arado Aircraft Company began work on a series of delta shaped, turbojet powered bombers, to fulfill the request of a “Long Range/High Speed Flying Wing Aircraft”.  In fact, most of the (in total 14) projects, designated Ar E.555-1 to -14, had a flying wing configuration because it  was thought to be the best design to fulfill a requirement of high speed, heavy loading and long-range aviation. Power was delivered by four to six turbojet engines. Due to the design acceptance by the RLM in early 1944, the Arado design team scaled down the projected, six turbojet engines equipped Arado E.555-1 bomber in same layout to design a smaller size fighter version, the Ar E.581-4. It was a single-seat fighter with a deep fuselage, and was powered by the single HeS 011 turbojet engine fed by a divided air intake under the cockpit. The wing was of a delta shape with the twin fins and rudders on the trailing edge, and the landing gear was of tricycle arrangement. Although work on the project was in progress Arado was ordered to cease all work on the  Ar E.581 for concentrating all facility resources on the existing fighter production (Jäger-Notprogramm, Fighter emergency program)  (Ref.: 16).