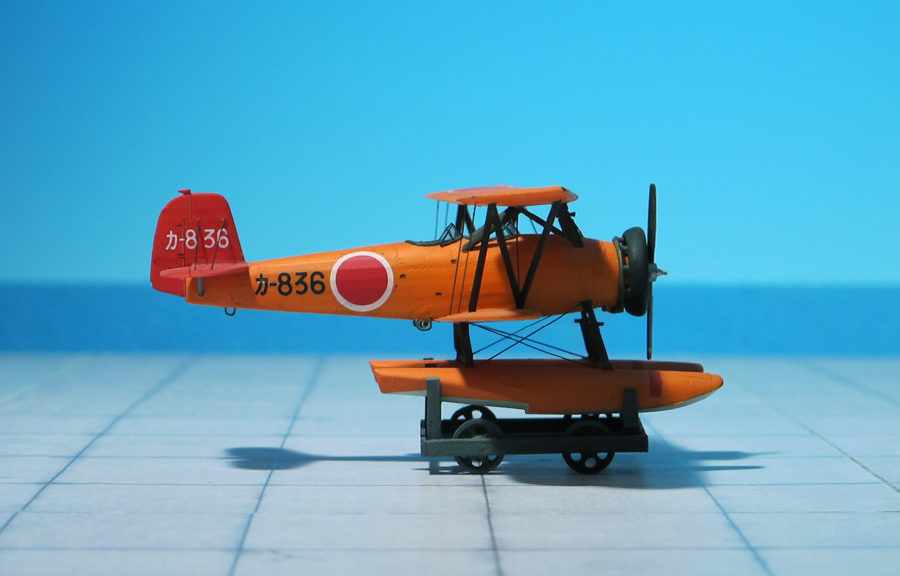 COMMENT: The Yokosuka K5Y2 was a two-seat unequal-span biplane trainer (Allied reporting name “Willow”) that served in the Imperial Japanese Navy during World War II. Due to its bright orange paint scheme (applied to all Japanese military trainers for visibility), it earned the nickname “Red dragonfly”, after a type of insect common throughout Japan.
The aircraft was based on the Yokosuka Navy Type 91 Intermediate Trainer, but stability problems led to a redesign by Kawanishi in 1933. It entered service in 1934 as Navy Type 93 Intermediate Trainer K5Y1 with fixed tail-skid landing gear, and remained in use throughout the war. Floatplane types K5Y2 and K5Y3 were also produced. After the initial 60 examples by Kawanishi, production was continued by Watanabe (556 aircraft built), Mitsubishi (60), Hitachi (1,393), First Naval Air Technical Arsenal (75), Nakajima (24), Nippon (2,733), and Fuji (896), for a total of 5,770. These aircraft were the mainstay of Imperial Japanese Navy Air Service’s flight training’s, and as intermediate trainers, they were capable of performing demanding aerobatic maneuvers. Two further land-based versions, the K5Y4 with a 480 hp “Amakaze” 21A engine and the K5Y5 with a 515 hp “Amakaze” 15, were projected but never built.
A K5Y of the Kamikaze Special Attack Corps 3rd Ryuko Squadron was credited with sinking the destroyer USS Callaghan on July 29, 1945, the last US warship lost to kamikaze attack during the war (Ref.: 24).