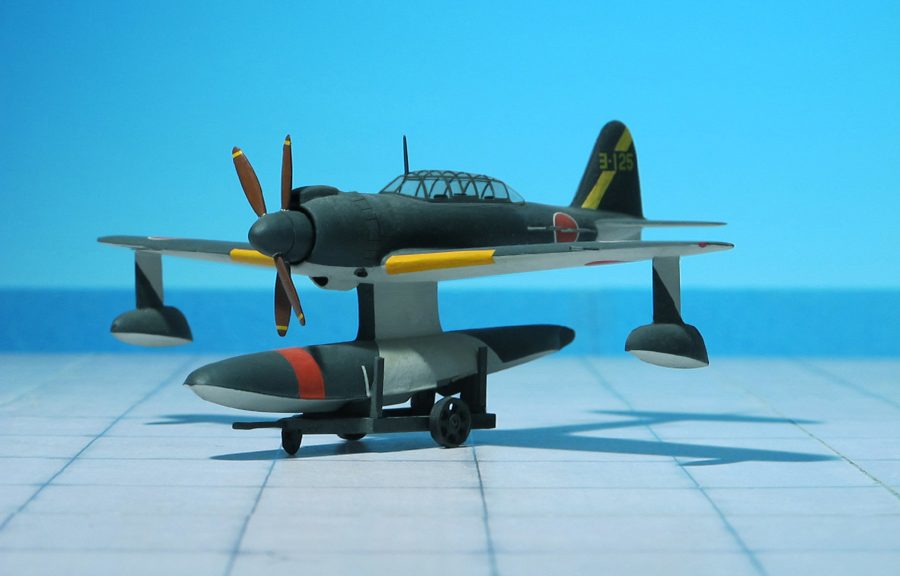 COMMENT: In 1939 the Imperial Japanese Navy instructed the Kawanishi Aircraft Company to develop a two-seat high-speed reconnaissance floatplane, which was required to have sufficient performance to escape interception by land based fighters. It was planned to equip a new class of cruisers, intended to act as a flagship for groups of submarines operating six of the new floatplanes to find targets. Kawanishi designed a single-engine low-wing monoplane, powered by a 1,460 hp Mitsubishi MK4D Kasei 14 radial engine driving two contra-rotating two-blades propellers, the first installation of contra-rotating propellers produced in Japan, while a laminar flow airfoil section was chosen to reduce drag. It had a single main float under the fuselage and two stabilising floats under the wing. The stabilising floats were designed to retract into the wing, while the central float was designed to be jettisoned in case of emergency, giving a sufficient increase in speed to escape enemy fighters. It is noteworthy to mention that similar design was chosen by Kawabishi’s engineers for the new Kawanishi N1K1 “Kyofu” float seaplane fighter.
The first prototype of Kawanishi’s design, designated E15K1 in the Navy’s short designation system made its maiden flight on 5 December 1941. Five more prototypes followed during 1941-42. Problems were encountered with the retractable stabilising floats, resulting in several accidents when the floats could not be lowered for landing, and the system was eventually abandoned, with the stabilising floats being fixed, and a more powerful Mitsubishi MK4S Kasei 24 engine fitted to compensate for the increased drag.
Despite these problems, the E15K1 was ordered into limited production as the Navy Type 2 High-speed Reconnaissance Seaplane “Shiun” Model 11. Six were sent to Palau in the South Pacific, but these were quickly shot down by Allied fighters, as the jettisonable float failed to separate on demand (although subjected to wind tunnel testing, the float separation system had never been tested on the actual aircraft). This resulted in the cancellation of production in February 1944, with only 15 “Shiuns” completed, including the six prototypes (Ref.: 24).