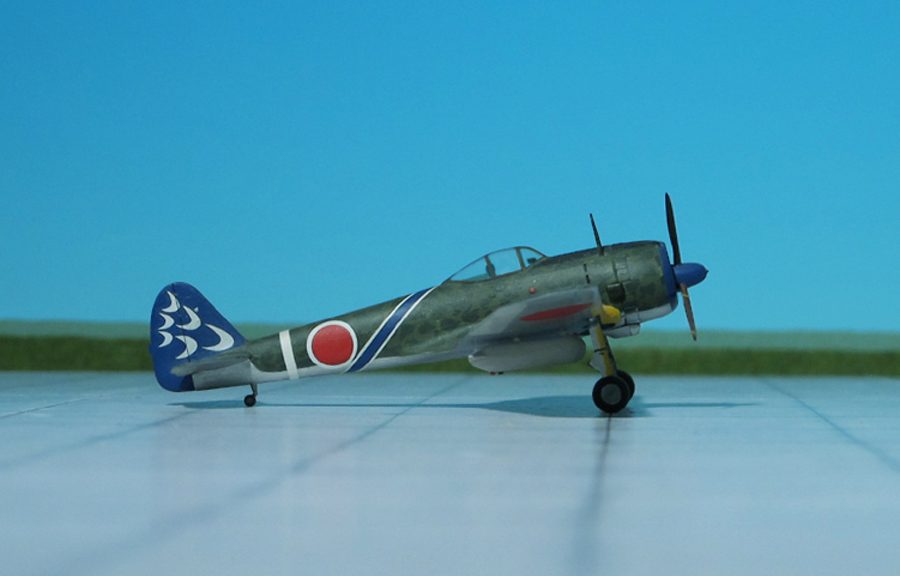 COMMENT: The Nakajima Ki-43 ‘Hayabusa’was a single-engine land-based tactical fighter used by the Imperial Japanese Army Air Force in WW II. It was light and easy to fly and became legendary for its combat performance in East Asia in the early years of the war. It could outmaneuver any opponent, but did not have armor or self-sealing tanks, and its armament was poor until its final version, which was produced as late as 1945. Allied pilots often reported that the nimble Ki-43s were difficult targets but burned easily or broke apart with few hits. In spite of its drawbacks, the Ki-43 shot down more Allied aircraft than any other Japanese fighter and almost all the JAAF’s aces achieved most of their kills in it. Prototypes for the Nakajima Ki-43-II flew in February 1942. The Ha-25 engine was upgraded with the 2-stage supercharger, thus becoming the more powerful Nakajima Ha-115 engine, which was installed in a longer-chord cowling. The new engine turned a three-bladed propeller. The wing structure, which had suffered failures in the Ki-43-I, was strengthened and equipped with racks for drop tanks or bombs. The Ki-43-II was also fitted with 13 mm armor plate for the pilot’s head and back, and the aircraft’s fuel tanks were coated in rubber to form a crude self-sealing tank. Nakajima commenced production of the Ki-43-II at its Ota factory in November 1942. Production was also started at the Tachikawa Hikoki KK and the 1st Army Air Arsenal (Tachikawa Dai-Ichi Rikugun Kokusho), also at Tachikawa. Although Tachikawa Hikoki successfully managed to enter into large-scale production of the Ki-43, the 1st Army Air Arsenal was less successful – hampered by a shortage of skilled workers, it was ordered to stop production after 49 Ki-43s were built. Nakajima eventually ceased production in mid-1944 in favor of the Nakajima Ki-84 ‘Hayate’, but the Tachikawa Hikoki continued to produce the Ki-43. Total production amounted to 5,919 aircraft. Many of these were used during the last months of the war for kamikaze missions against the American fleet (Ref.: 24).