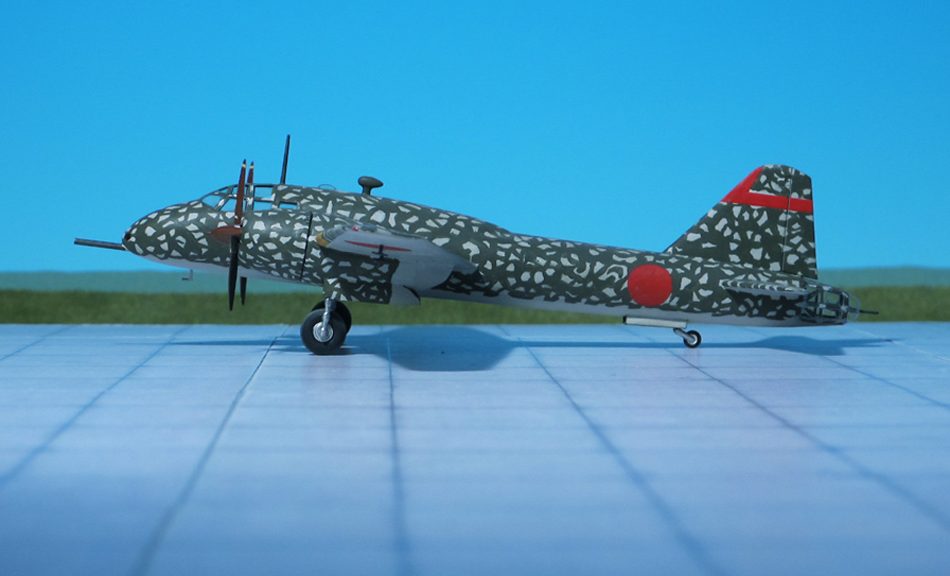 COMMENT: In early 1943 the Mitsubishi Ki-67 heavy bomber then undergoing flight trials had proved that despite its size and weight it was fast and manoeuvrable. Consequently it was suggested that the Ki-67 be used as a basis for a hunter-killer aircraft. The project received the designation Ki-109 and two versions were built. The Ki-109a, nick-named “Killer”, was to mount in the rear fuselage two oblique-firing 37 mm Ho-203 cannon while the Ki-109b, the “Hunter”, was to be equipped with radar and a 40 cm search light. However, soon thereafter, the project was redirected and a standard 75 mm Type 88 anti-aircraft cannon was to be mounted in the nose. It was hoped that with this large cannon the aircraft could be able to fire on the Boeing B-29s while staying well out of range of their defensive armament. As the authorities anticipated that, initially at least, the B-29s would have to operate without fighter escort, the project was found sound and feasible and Mitsubishi were instructed in early 1944 to begin designing the aircraft which retained the Ki-109 designation.
Ground and inflight test firing of the heavy gun were sufficiently successful and an initial order of 44 aircraft was placed. Fifteen shells were carried for the 75 mm Type 88 cannon which were hand-loaded by the co-pilot, and the sole defensive armament consisted of a flexible 12.7 mm machine-gun in the tail turret. The rest of the airframe and the power plant were identical to those of the Ki-67. Despite the lack of high-altitude performance the Ki-109 was pressed into service, but, by the time enough aircrafts were on hand, the B-29s had switched to low-altitude night operations. A total of 22 Ki-109s were built by Mitsubishi Jukogyo K.K. (Ref.: 1).