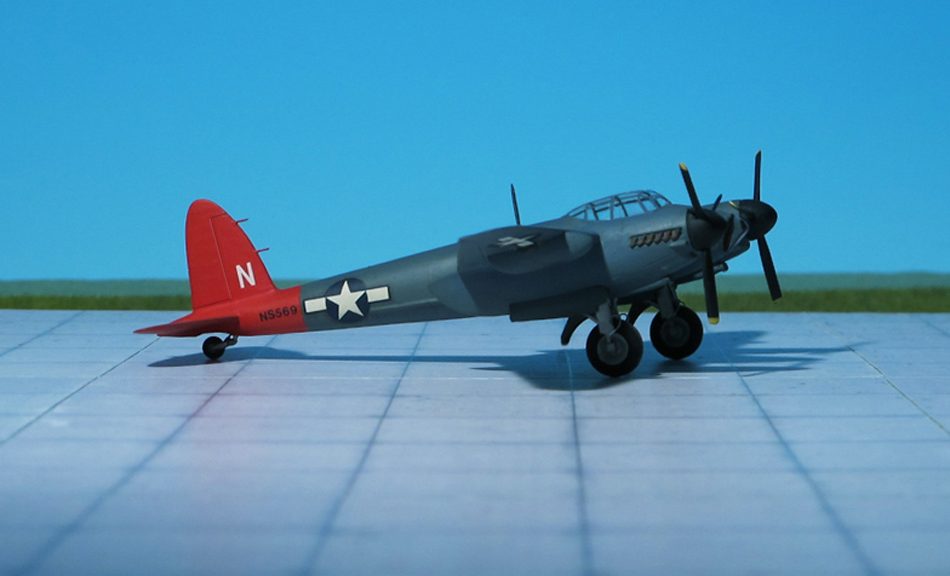 COMMENT: Until the end of WW II the de Havilland Company Canada rolled out 1,133 “Mosquito” aircraft of different subtypes.  The “Mosquito” B Mk XX was the Canadian version of the “Mosquito” B. Mk. IV bomber aircraft of which 145 were built. From these 40 were converted into F-8 photo-reconnaissance aircraft for the USAAF and used with the 8th USAAF in the European Theatre of Action. It had the same Packard “Merlin” engines and was equipped with three overload fuel tanks, totaling 3,500 L in the bomb bay. Additionally, for range extension it could also carry two 230 L or 450 L drop tanks.
The de Havilland “Mosquito” of 25th BG(R) -802 RG(P) were painted in normal RAF P.R. Blue finish. In August 1944 the vertical tail was colored in red and in September 1944 all tail surfaces were painted red. This marking was necessitated by frequency of misidentification of “Mosquito” as enemy type. Similar marking were used on Boeing B-17G of 652 BS.
The 25th Bombardment Group (Reconnaissance) was constituted in the days after D-Day and activated in England in August 1944 to carry out photographic and mapping missions over mainland Europe as the Allied armies pushed east. The Group were designated a Bombardment Group but they did not drop bombs. Instead they flew bombers to drop ‘chaff’ screenings for other Bomb Groups. ‘Chaff’, strips of metallic paper, would interfere with the enemy’s ability to detect aircraft using radar (Ref.: 24).