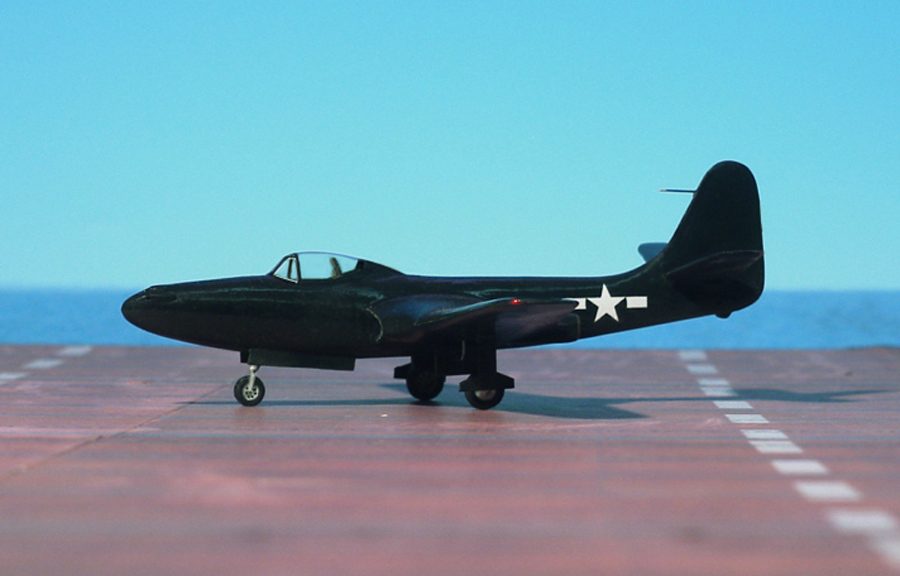 COMMENT: In early 1943, aviation officials at the United States Navy were impressed with McDonnell’s audacious XP-67 “Bat” project. McDonnell was invited by the Navy to cooperate in the development of a shipboard jet fighter, using an engine from the turbojets under development by Westinghouse Electric Corporation. Three prototypes were ordered on August 1943 and the designation XFD-1 was assigned. Under the 1922 United States Navy aircraft designation system, the letter “D” before the dash designated the aircraft’s manufacturer. The Douglas Aircraft Company had previously been assigned this letter, but the USN elected to reassign it to McDonnell because Douglas had not provided any fighters for Navy service in years.
McDonnell engineers evaluated a number of engine combinations, varying from eight 24 cm diameter engines down to two engines of 48 cm diameter. The final design used the two 48 cm engines after it was found to be the lightest and simplest configuration. The engines were buried in the wing root to keep intake and exhaust ducts short, offering greater aerodynamic efficiency than underwing nacelles and the engines were angled slightly outwards to protect the fuselage from the hot exhaust blast. Placement of the engines in the middle of the airframe allowed the cockpit with its bubble-style canopy to be placed ahead of the wing, granting the pilot excellent visibility in all directions. This engine location also freed up space under the nose, allowing designers to use tricycle gear, thereby elevating the engine exhaust path and reducing the risk that the hot blast would damage the aircraft carrier deck. The construction methods and aerodynamic design of the “Phantom”, as the aircraft was assigned, were fairly conventional for the time; the aircraft had unswept folding wings.  Adapting a jet to carrier use was a much greater challenge than producing a land-based fighter because of slower landing and takeoff speeds required on a small carrier deck. When the first XFD-1was completed in January 1945, only one Westinghouse was available for installation. Ground runs and taxi tests were conducted with the single engine, and such was the confidence in the aircraft that the first flight on 26 January 1945 was made with only the one turbojet engine. During flight tests, the “Phantom” became the first naval aircraft to exceed 500 mph. With successful completion of tests, a production contract was awarded on March 1945 for 100 FD-1 aircraft. With the end of the war, the “Phantom” production contract was reduced to 30 aircraft, but was soon increased back to 60.
The first prototype was lost in a fatal crash on November 1945, but the second and final “Phantom” prototype was completed early the next year and became the first purely jet-powered aircraft to operate from an American aircraft carrier, completing four successful takeoffs and landings on 21 July 1946, from USS CV-42 “Franklin D. Roosevelt”.  At the time, she was the largest carrier serving with the U.S. Navy, allowing the aircraft to take off without assistance from  a catapult (Ref. 24).