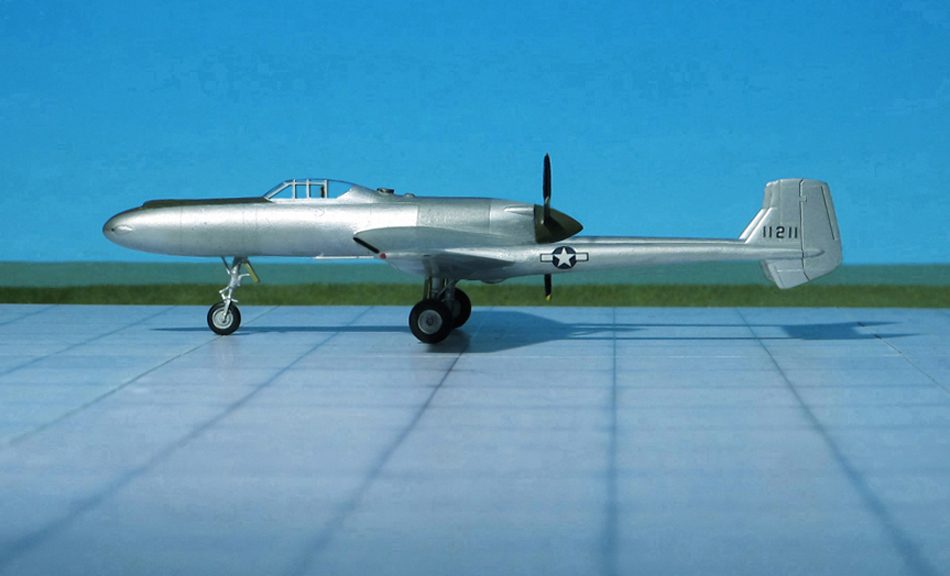 COMMENT: The Vultee Company had submitted a proposal in response to a US Army Air Corps request for an unusual configuration. The Vultee design won the competition, beating the Curtiss XP-55 “Ascender” and Northrop XP-56 “Black Bullet”. Vultee designated it Model 84, a descendant of their earlier Model 78. After completing preliminary engineering and wind tunnel tests, a contract for a prototype was awarded on January 1941. A second prototype was ordered on March 1942..
The XP-54 was designed with a pusher engine in the aft part of the fuselage. The tail was mounted rearward between two mid-wing booms, with the 12-ft propeller between them. The design included a “ducted wing section” developed by the NACA (National Advisory Committee of Aeronautics)  that enabled installation of cooling radiators and intercoolers in the inverted gull wing. The Pratt & Whitney X-1800 engine was initially proposed as the power plant but after its development was discontinued, the liquid-cooled Lycoming XH 2470 was substituted.
In September 1941, the XP-54 mission was changed from low altitude to high altitude interception. Consequently, a turbo-supercharger and heavier armor had to be added, and the estimated empty weight increased from 5,200 to 8,200 kg.
The XP-54 was unique in numerous ways. The pressurized cockpit required a complex entry system: the pilot’s seat acted as an elevator for cockpit access from the ground. The pilot lowered the seat electrically, sat in it, and raised it into the cockpit. Bail-out procedure was complicated by the pressurization system and necessitated a downward ejection of the pilot and seat in order to clear the propeller arc. Also, the nose section could pivot through the vertical, three degrees up and six degrees down. In the nose, two 37 mm T-9 cannon were in rigid mounts while two .50 cal. machine guns were in movable mounts. Movement of the nose and machine guns was controlled by a special compensating gun sight. Thus, the cannon trajectory could be elevated without altering the flight attitude of the airplane. The large nose section gave rise to its whimsical nickname, the “Swoose Goose”, inspired by a song about Alexander who was half swan and half goose: “Alexander was a swoose.”
Flight tests of the first prototype, Serial Nr. 41-1210, began on 15 January 1943. Initial trials showed performance to be substantially below guarantees. At the same time, development of the XH-2470 engine was discontinued and, although it appeared possible to substitute the Allison V-3420 engine without substantial airframe changes, the projected delay and costs resulted in a decision not to consider production buys.
The prototypes continued to be used in an experimental program until problems with the Lycoming engines and lack of spare parts caused termination. The second prototype, 42-108994 (but mistakenly painted as 42-1211) equipped with an experimental General Electric supercharger, only made one flight before it was relegated to a “parts plane” in order to keep the first prototype in the air (Ref.: 24).