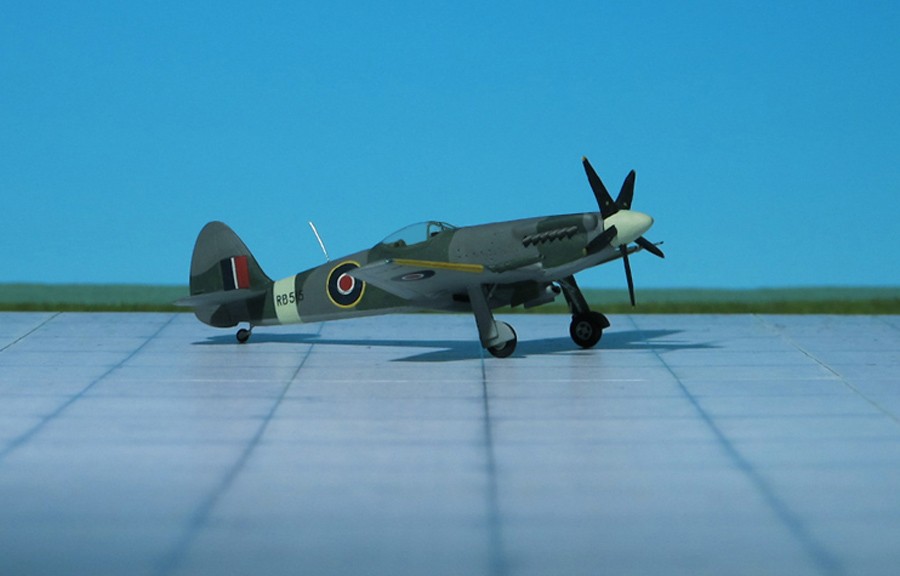 COMMENT: The Supermarine Spiteful was a British Rolls-Royce Griffon-engined fighter aircraft designed by Supermarine to Air Ministry specification F.1/43 during WW II as a successor to the famous Spitfire. By 1942, Supermarine designers had realised that the characteristics of the Spitfire’s wing at high Mach numbers might become a limiting factor in increasing the aircraft’s high-speed performance. The main problem was the aeroelasticity  of the Spitfire’s wing; at high speeds the relatively light structure behind the strong leading edge torsion box would flex, changing the airflow and limiting the maximum safe diving speed to 480 mph. If the Spitfire were to be able to fly higher and faster, a radically new wing would be needed. The new wing was of single-spar stressed-skin construction with an auxiliary spar and fitted to a modified Spitfire Mk. XIV, in order to make a direct comparison with the earlier elliptical wing, and was first flown on 30 June 1944. The new Spitfire’s speed performance was comfortably in excess of an unmodified Spitfire XIV, but the new wing displayed some undesirable behaviour at the stall. Additionally the Supermarine team took the opportunity to redesign the Spitfire’s fuselage, to improve the pilot’s view over the nose and to eliminate gross directional instability by using a larger fin and rudder. This instability had been apparent since the introduction of the more powerful Griffon engine. The instability was exacerbated by the increase in propeller blade area due to the introduction of the four-bladed and subsequent five-bladed airscrews. The updated design was now substantially different from a Spitfire, the aircraft was named “Spiteful” ,although “Victor” had been originally proposed. The reason for the allocation of the mark number “XIV” to the first production variant is somewhat obscure but appears to have stemmed from an early attempt to link the mark numbers of the new fighter to those of the equivalent Spitfires from which, at the time, they stemmed. In production when the war terminated, the Spiteful was never issued to a squadron, but in its definite form it gained the distinction of being the fastest piston-engined aircraft ever produced in the UK (Ref.: 23).