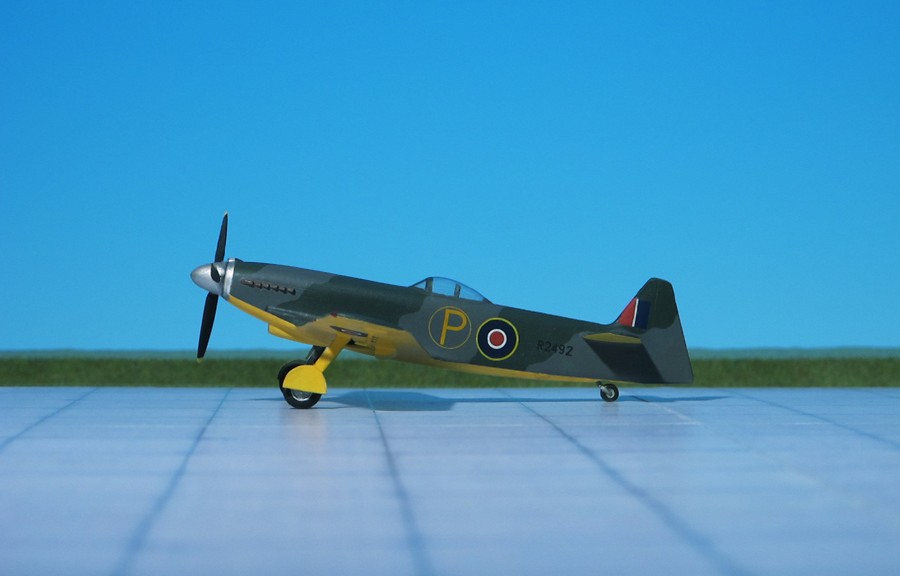 COMMENT: In early 1942 the British Air Ministry issued specification F.18/39 that called for a single-seat fighter with a maximum speed of not less than 400mph at 15,000 ft, a service ceiling of not less than 35,000 ft, a fuel capacity sufficient for thirty minutes at maximum power, two hours at economical cruising speed plus thirty percent reserves, and a loaded weight not exceeding 12,000lb. To meet these requirements, the Martin-Baker Aircraft Company designed an aircraft, M.B.3, with remarkably strong structure, a phenomenally heavy armament, and good handling qualities. Two prototypes of the M.B.3 were ordered and the first of these was flown on August 1942. Trials indicated that the prototype was extremely maneuverable and processed excellent handling characteristics. On September 1942, during landing approach, the Sabre engines failed and the aircraft was completely destroyed. Construction of the second prototype, powered by a Rolls-Royce Griffon engine and the designation M.B.4 was abandoned in favor of an extensively redesigned model, the Martin-Baker M.B.5 (Ref.: 12)