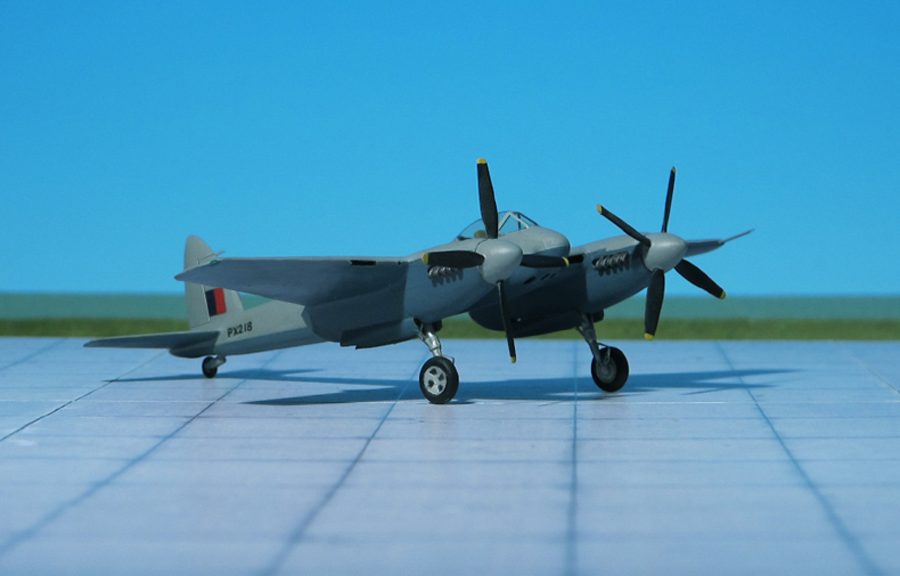 COMMENT: The de Havilland D.H.103 ‘Hornet’ was perhaps the most graceful twin-engined monoplane to be produced by any combatants during WW II. The experience gained by the company with the de Havilland ‘Mosquito’, coupled with a need for a long-range, single-seat fighter for the use in what appeared likely to be a prolonged island-hopping in the South Pacific against the Japanese, led to the design of an unusual clean ’Merlin’-powered aircraft. The first prototype D.H.103, officially to be named ‘Hornet’, was flown on July 1944. Production of sixty ‘Hornet’ F.1s was commenced late in 1944, and the first aircraft off the line flew on February 1945. The prototypes of the ‘Hornet’ had achieved the phenomenal speed of 485 mph and with full operational equipment the production ‘Hornet’ F.1 was only a shade slower at 472 mph. The ‘Hornet’ was too late to see operational service during WW II, however, the first squadron, No 64, re-equipped early in 1946. A conversion of the ‘Hornet’ F.1 initiated before the end of war was the navalisation of two machines for use on carriers. Equipped with folding wings, these aircraft were named ‘Sea Hornet’ (Ref.: 12)