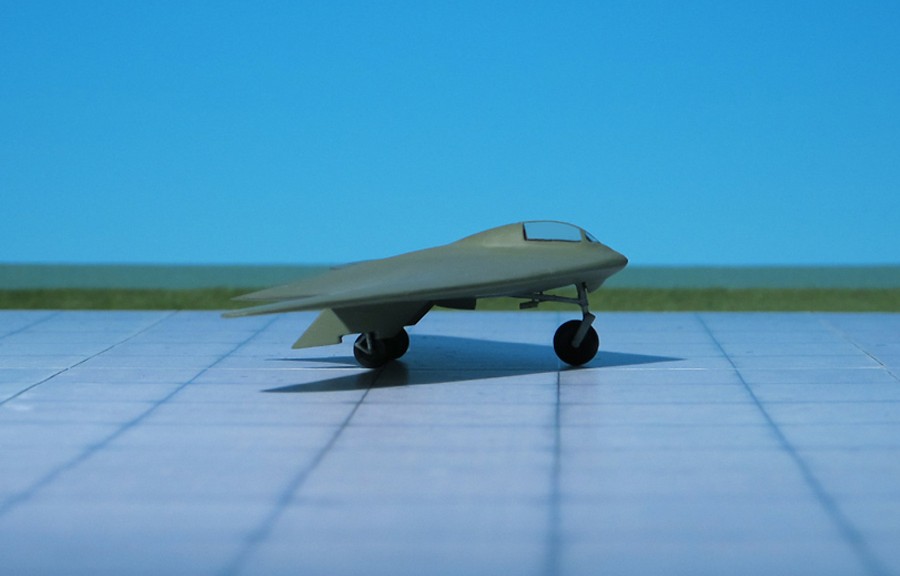 COMMENT: During summer 1943 the RLM interest in a pure flying wing had waned. Despite this loss of official interest, the Horten brothers continued to work on their jet fighter project which they had designated Horten Ho IX, and although entirely unauthorized by the RLM, construction work on a prototype had already started at Göttingen. To explore the aerodynamic characteristics of the revolutionary fighter thoroughly before attempting powered flight trials, the first prototype, the Ho IX V-1, was intended from the outset for testing as a glider before the installation of the planned BMW 003 turbojets, and was provided with a fixed tricycle undercarriage, the legs of the aft members being enclosed by swept aerofoil-section fairings. It was not until early 1944 that the RLM became aware of the existence of the Horten prototype and issued instructions that powered trial should be initiated. During spring 1944 the Ho IX V-1 had performed its first successful gliding trials and showed highly favourable results. But further trials terminated abruptly when the prototype crashed during a landing attempt. Meanwhile work began on the construction of a second prototype, Horten Ho IX V-2. The center section, accommodating the cockpit, power plants and undercarriage wells, was of conventional welded steel-tube construction with plywood skinning. Powered by two Junkers Jumo 004B turbojet engines, the Horten Ho IX V-2 made its test flight in January 1945.