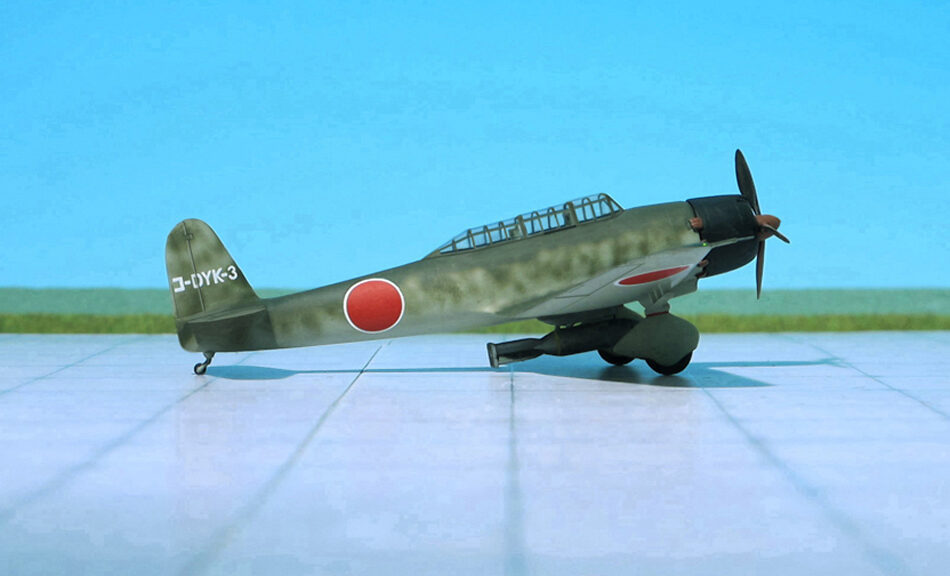 COMMENT: The Yokosuka D3Y “Myojo” (“Venus”) was a Japanese two-seat dive bomber/trainer designed and built by the Yokosuka Naval Air Technical Arsenal derived from the Aichi D3A. It was made nearly entirely of wood in an attempt to conserve valuable resources. Upon Japan’s surrender, the project came to a halt with only a few aircraft delivered.
The D3Y was a two-seat bomber trainer constructed of wood, so as not to use more valuable materials. It was based on the successful Aichi D3A, with design starting in late 1942. Like the D3A, it was a two-seat low-winged monoplane with a fixed tailwheel undercarriage. To allow construction by unskilled workers, the elliptical wing and rounded tail of the D3A were replaced by straight tapered alternatives, while the fuselage was lengthened to improve stability. Two prototypes were built during 1944, but these proved heavier than expected. Three production aircraft, which were redesigned to save weight, were completed for the Imperial Japanese Navy Air Force (IJNAF) before the end of the war, and officially designated the Navy Type 99 Bomber Trainer Myojo Model 22.
In Yokosuka’s design bureau two different variants of the basic design were on the drawing board.
The D3Y1-K “Myojo” (Navy Type 99 Bomber Trainer Myojo Model 22) was a two seat wooden dive-bomber trainer. Powered by a 1,300 hp Mitsubishi Kinsei 54 radial engine, based on the Aichi D3A2-K, the aircraft featured some significant changes to allow production in wood. Two prototypes and three production aircraft were completed before the final collaps.
The second design, a single-seat D3Y2-K Special Attacker Myojo Kai (“Venus Modified”) for suicide missions was initiated early in 1945. Powered by a 1,560 hp Mitsubishi Kinsei 62 and fitted with a jettisonable undercarriage on take-off since the aircraft was not expected to return. This version was to have been armed with two 20mm Type 99 MK1 cannon in the engine cowling was to carry a single bomb up to 800 kg. The prototype had not been completed when the war ended, and the planned monthly production of thirty D5Y-1s, as the aircraft had been redesignated, was never undertaken (Ref.: 1, 24).