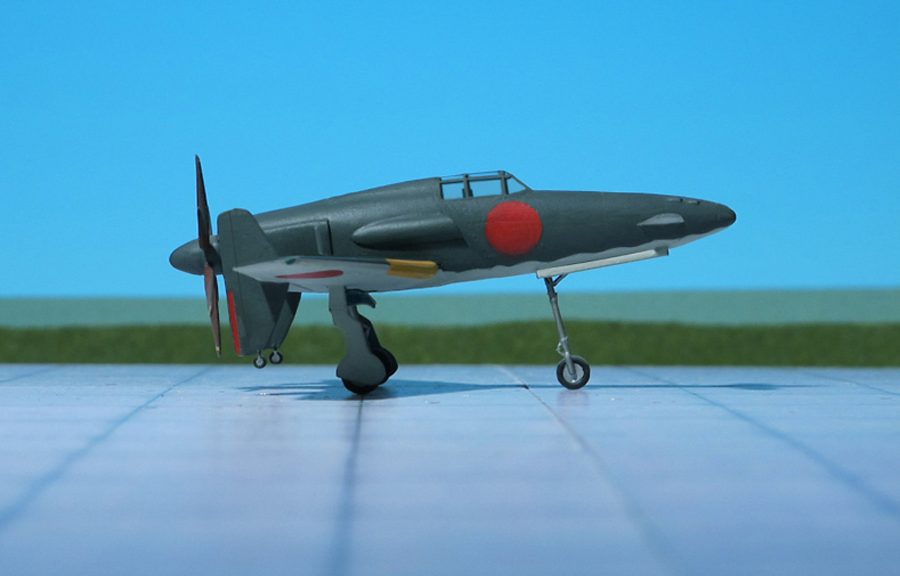 COMMENT: The Kyūshū J7W1 “Shinden”( “Magnificent Lightning”) fighter was a Japanese propeller-driven aircraft prototype with wings at the rear of the fuselage, a nose mounted canard, and pusher engine. Developed by the Imperial Japanese Navy (IJN) as a short-range, land-based interceptor, the J7W was a response to Boeing B-29 “Superfortress” raids on the Japanese home islands. In the IJN designation system, “J” referred to land-based fighters and “W” to Watanabe Tekkōjo, the company that oversaw the initial design..
The construction of the first two prototypes started in earnest by June 1944, and the first prototype was completed in April 1945. The 2,130 hp Mitsubishi MK9D (Ha-43) radial engine and its supercharger were installed behind the cockpit and drove a six-bladed propeller via an extension shaft. Engine cooling was to be provided by long, narrow, obliquely mounted intakes on the side of the fuselage. It was this configuration that caused cooling problems while running the engine while it was still on the ground. This, together with the unavailability of some equipment parts postponed the first flight of the “Shinden”. Even before the first prototype took to the air, the Navy ordered the J7W1 into production, with a quota of 30 “Shinden” a month given to Kyushu’s Zasshonokuma factory and 120 from Nakajima’s Handa plant. It was estimated some 1,086 “Shinden” could be produced between April 1946 and March 1947.
On August 1945, the prototype first flew from Itazuke Air Base. Two more short flights were made, a total of 45 minutes airborne, one each on the same days as the atomic bombings of Hiroshima and Nagasaki occurred, before the war’s end. Flights were successful, but showed a marked torque pull to starboard (due to the powerful engine), some flutter of the propeller blades, and vibration in the extended drive shaft.
A turbojet engine–powered version, the Kyushu J7K2, was considered, but never even reached the drawing board (Ref.: 24).