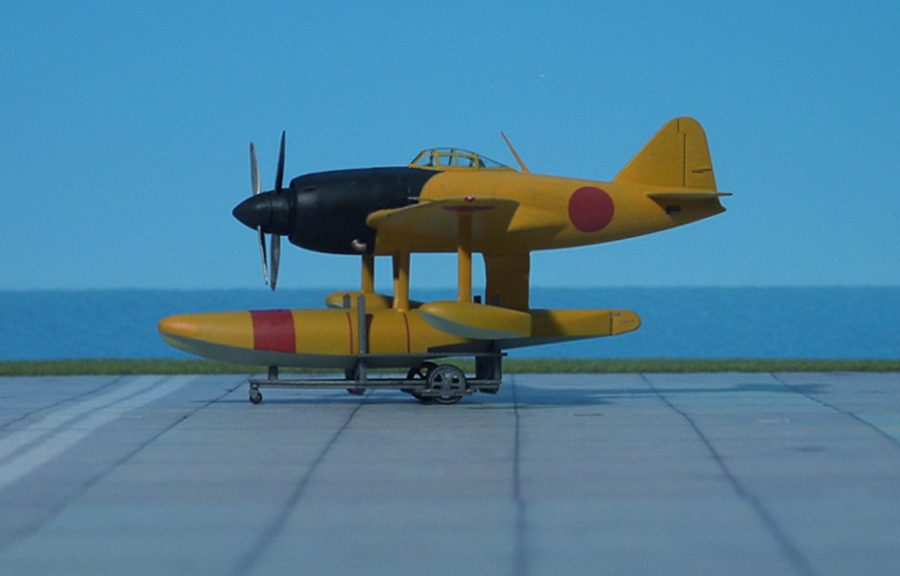 COMMENT: Appearing too late to serve in its intended role, the Kawanishi N1K1 “Kyofu (“Mighty Wind”) floatplane fighter participated only briefly in combat operations but it sound design led to its adaptation into one of the most successful land-based fighter aircraft of WW II, the Kawanishi N1K1-J “Shiden”.
Development of a series of floatplane fighters intended to provide air support to Japanese amphibious landing forces in areas where no airfield existed was initiated in 1940, while Nakajima Hikoki K.K. undertook the development of an interim aircraft – the A6M2-N – Kawanishi Kokuki K.K  were instructed to initiate the design of an aircraft specially conceived for that purpose. Issued by the Japanese Navy in September 1940 planning began immediately in the Kawanishi engineering office. Basing their efforts on the advanced technology developed for the Kawasnishi E15K1 “Shiun”, a team of engineers designed a compact floatplane with mid-mounted wings of laminar-flow section. Like the “Shiun”, the projected floatplane fighter, then known by the designation of K-20, was to be powered by a 1,460 hp Mitsubishi MK4D “Kasei 14” driving two contra-rotating two-blade propellers to offset the anticipated propeller torque on take-off. The central float was to be attached to the fuselage by a V-strut forward and an I-strut at the rear, but the proposed use of retractable stabilizing floats with metal planning bottom and inflatable rubberized-fabric tops could be traced to the “Shiun’s” design philosophy. Difficulties encountered with this type of float during the early part of E15K1 flight trial programme led to their replacement by fixed cantilever floats prior to the aircraft’s first flight.
Following the completion the first N1K1 made its successful maiden flight on 6 May, 1942. However, teething troubles with the contra-rotating propeller gear box – similar to those experienced in the E15K1 programme – led to the decision to replace the “Kasei 14” engine by a MK4C “Kasei 13” driving conventional three-blade propeller via an extension shaft. Once in the air the N1K1 was an extremely pleasant aircrafts to handle and the use of combat flaps gave it remarkable maneuverability. Finally, based on these good results the Japanese Navy ordered the aircraft into quantity production as the Navy Fighter Seaplane “Kyofu Model 11”, (Kawanishi N1K1 “Kyofu”) and deliveries of production aircraft began in spring 1943 (Ref.: 1).