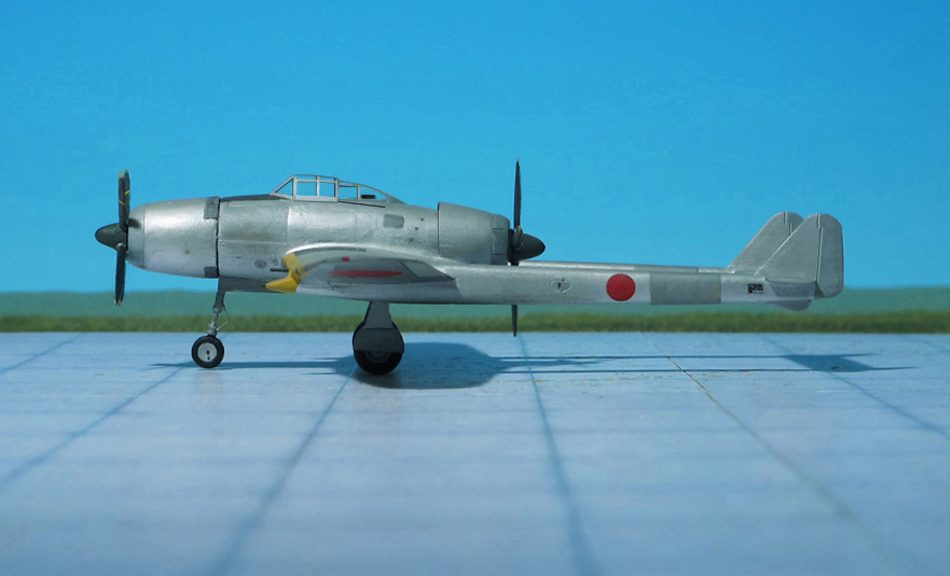 COMMENT: Preliminary discussions regarding a heavily armed high-altitude fighter were held between the Koku Hombu and Tachikawa Hikoki K. K. in mid-1942. The new aircraft was to be fitted with a pressure cabin and capable of reaching a top speed of 490 mph.  The aircraft proposed by Tachikawa, which received the Kita designation Ki-94, was of a highly unconventional design. The aircraft was a large twin-boom monoplane, powered by two 2,200 hp Mitsubishi Ha-211 Ru air-cooled radials which were mounted fore and aft of the pilot’s cockpit and drove four-blade tractor and pusher propellers. The very heavy armament that should have been mounted on the aircraft should have been powerful enough to make short work of most US heavy bombers of that area at that time. A full-scale wooden mock-up of the Ki-94 was ordered and built although at the same time a contract was placed with Nakajima for another high-altitude fighter, the Ki- 87, with less stringent range requirements as a fall-back design for the Tachikawa Ki-94.
Notwithstanding the outstanding prospective performance, which however was judged by the technical department of the Japanese Army Air Force as “unduly optimistic” and too complex, the design was discarded. But in mid-1943 Tachikawa submitted a new proposal to meet the same requirements as the competitive Nakajima Ki-87. In order to avoid confusion the Kitai designation the first Tachikawa design received the designation Ki-94-I, and the new design Ki-94-II (Ref.: 1, 24).