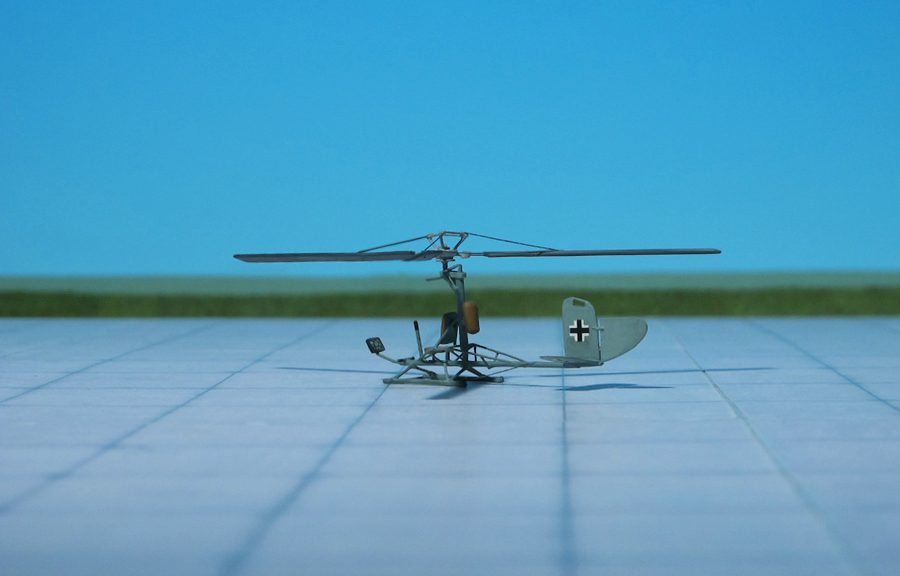 COMMENT: The Focke-Achgelis Fa 330 “Bachstelze” (“Wagtail”) was a type of rotary-wing kite, known as a gyro glider or rotor kite. They were towed behind German submarines during WW II to allow a lookout to see farther. Because of their low profile in the water, submarines could not see more than a few miles over the ocean. To solve this, the German admiralty considered a number of different options, including a folding sea plane e.g. Arado Ar 231. In the end, they chose the Fa 330, a simple, single-seater, autogyro kite with a three-bladed rotor. The Fa 330 could be deployed to the deck of the submarine by two people and was tethered to the U-boat by a 500 ft cable. The airflow on the rotors as the boat motored along on the surface would spin them up. The kite would then be deployed behind the U-boat with its observer-pilot aboard, raising him approximately 400 ft above the surface and allowing him to see much farther — about 25 nautical miles, compared to the 5 nautical miles visible from the conning tower of the U-boat. If the U-boat captain were forced to abandon it on the surface, the tether would be released and the Fa 330 descend slowly to the water. When not in use, the Fa 330 was stowed in two watertight compartments aft of the conning tower. Recovering, dismantling, and stowing the Fa 330 took approximately 20 minutes and was a difficult operation. The Allies came into possession of a Fa 330 in May 1944 when they captured the U-852 intact. After the war, the British government did successful experiments towing Fa 330s behind ships and jeeps, but the development of the helicopter quickly occupied the attention of the military. It is noteworthy that in early 1940 the British made similar experiments with the Hafner “Rotachute”, an autogiro kite to transport a paratrooper (Ref. 24).