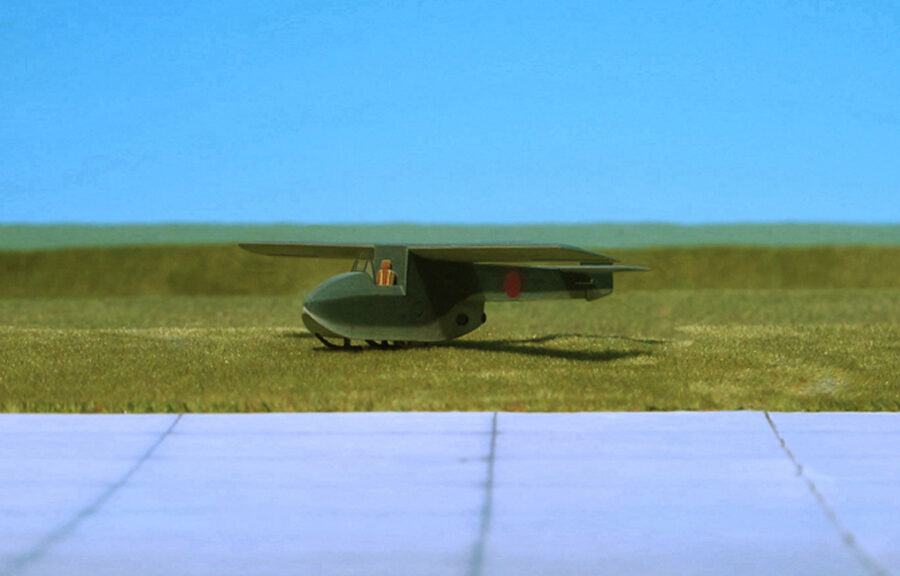 COMMENT: In November 1944, the Navy Aviation Bureau looked into the possibilities of an aircraft to undertake suicide missions. While the mission was not unique, the fact that the aircraft being investigated would be a glider was unique. The Bureau envisioned that gliders would be launched with rocket boosters from caves or shore positions and pilots would guide the aircraft and the 100 kg explosive payload inside into Allied ships or tanks should the Japanese home islands be invaded. The Bureau assigned the Yokosuka Naval Air Technical Arsenal at Yokosuka the task of turning the glider into reality. The project was realized by a number of teams that would each be responsible for one part of the glider. The different sections were the wings, the fuselage, control surfaces, aerodynamic testing and test flights once the prototype was complete. The Navy Aviation Bureau gave instructions that the glider must be built from as much wood as possible.
This restriction was imposed for two reasons. The first was that in using wood and keeping the use of metal to an absolute minimum, the glider could be manufactured in any small shop using only wood working tools, and secondly, as a consequence, what metals were available would be conserved for other military uses. A number of concepts were discussed and sketched and after much deliberation among the design teams the prototype was complete by May 1945, and the Mizuno Corporation, a small glider manufacturer better known for sports equipment, had almost finished the glider.
The glider was very simple and used a high-wing monoplane form. The straight and flat wings were wide but had a short span and were designed to ensure that the glider was easy to handle given that inexperienced pilots would be at the controls. Also, the platform would be able to accommodate the rocket engines that were to be used to boost the glider into the air. The pilot sat in an open cockpit. The design was sent to the Navy Aviation Bureau for review with the result that several changes were necessary.
After these had been made the design was approved. Work began on the revised Jinryu (Divine Dragon), as the glider was now called, by the middle of June 1945. Construction of the Jinryu was again given to Mizuno Corporation. Working around the clock, the company completed two prototypes with such speed that wind tunnel testing of the design was still underway. In fact, the first flight of the Jinryu occurred in mid-July 1945 at the airfield in Ishioka, a city located about 90 km northeast of Tokyo. The Jinryu was towed into the air by a Tachikawa Ki-9. These tests showed that the glider was stable and possessed good handling characteristics. For the second flight the diving capability of the the Jinryu was tested and the glider reached a speed of 190 mph.
The Jinryu was modified by adding some strengthening in the enlarged tail and the the next phase of a powered flight  began. The glider was modified to accept a group of three Toku-Ro I Type I rocket engines that together would produce 300 kg of thrust during a 10-second burn. Testing of the rocket array showed two serious flaws. The first was the quality of the rockets that resulted in a number of failures. The second reason was the inconsistency of the burn times. Despite the changes made to the glider to improve the flight characteristics, it was a challenging aircraft to fly and as a result the Jinryu was found to be unsuited for suicide missions. In total only five Jinryu gliders were produced.
Nevertheless, it was suggested that instead of being used for suicide operations, the the design was modified to a much enlarged glider fighter aircraft. Provision was made that the glider should be modified to take six rocket engines each with a 30-second burn time. It was estimated that at maximum burn the new design could attain a speed of 470 mph, and for weapons it was envisioned that it could carry ten explosive charges adapted from artillery shells used by the Imperial Japanese Army Airforce (IJA) in their 100 mm guns. This new aircraft was designated Shinryu (Divine Dragon II) and could be used against tanks and ships but added that it could also be used to attack US Boeing B-29 Superfortress bombers. All work was stopped with the end of WW II (Ref.: 24).