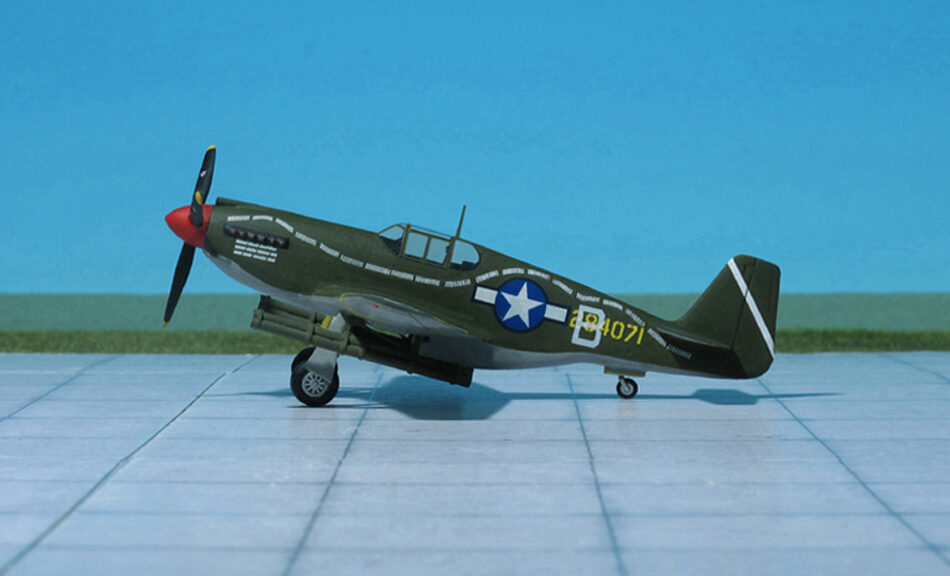 COMMENT: The North American A-36 (listed in some sources as “Apache“ or “Invader”, but generally called Mustang) was the ground-attack/dive bomber version of the North American P-51 Mustang, from which it could be distinguished by the presence of rectangular, slatted dive brakes above and below the wings. A total of 500 A-36 dive bombers served in the Mediterranean and Southeast Asia theaters during WW II before being withdrawn from operational use in 1944.
The A-36 project was a stopgap measure intended to keep North American (NAA) assembly lines running during the first half of 1942 despite the US having exhausted its funds earmarked for fighter aircraft. When the order came for more P-51s in June 1942, the NAA workforce was thoroughly experienced.
With the introduction of the North American Mustang Mk.I with the Roya Air Force’s Army Co-operation Squadrons in February 1942, the new fighter began combat missions as a low-altitude reconnaissance and ground-support aircraft. Supplementing the Curtiss P-40 Tomahawks already in service, Mustang Mk Is were first supplied to No. 26 Squadron RAF, then rapidly deployed to 10 additional squadrons by June 1942.
Despite the limited high-altitude performance of the Allison V-1710 engine, the RAF was enthusiastic about its new mount, which “performed magnificently”. During the Mustang Mk. I’s successful combat initiation, North American’s president  pressed the newly redesignated U.S.Army Air Forces (USAAF) for a fighter contract for the essentially similar P-51, 93 of which had passed into the USAAF when the Lend-Lease contract with Britain ran out of funds. The Mustang Mk IA/P-51 used four 20 mm Hispano wing cannon in place of the original armament, a combination of four wing-mounted 7.62 mm M1919 Browning machine guns and four 12.7 mm M2 Browning machine guns, two of which were mounted in the wings, while the second pair was mounted in the “chin”, or lower engine cowling, and synchronized to fire through the propeller. No funds were available for new fighter contracts in fiscal year 1942, but General O. P. Echols and Fighter Project Officer B. S. Kelsey wanted to ensure that the P-51 remained in production.
Since appropriations were available for an attack aircraft, Echols specified modifications to the P-51 to turn it into a dive bomber. The contract for 500 A-36A aircraft fitted with bomb racks, dive brakes, and heavier-duty wing, was signed by Kelsey on 16 April 1942, even before the first flight of the first production P-51 in May 1942. With orders on the books, North American Aviation (NAA) began modifying the P-51 to accept the bomb shackles which had already been tested in a “long-range ferry” program that the RAF had stipulated. Utilizing the basic P-51 airframe and Allison engine, structural reinforcing “beefed up” several high stress areas and “a set of hydraulically operated dive brakes were installed in each main wing plane”. Due to the slightly inboard placement of the bomb racks and unique installation of four cast aluminum dive brakes, a complete redesign of the P-51 wing was required
The first A-36A was rolled out of the NAA Inglewood plant in September 1942, rapidly going through flight testing with the first flight in October, with deliveries commencing soon after of the first production machines. The A-36A continued the use of nose-mounted 12.7 mm machine guns along with wing armament of four 12.7 mm caliber machine guns. The USAAF envisaged that the dive bomber would operate mainly at altitudes below 12,000 ft and specified the use of a sea level-rated Allison V-1710-87, driving a 10 ft 9 in-diameter three bladed Curtiss-Electric propeller and delivering 1,325 hp at 3,000 ft The main air scoop inlet was redesigned to become a fixed unit with a larger opening, replacing the earlier scoop which could be lowered into the airstream. In addition the A-36 carburetor air intake was later fitted with a tropical air filter to stop sand and grit being ingested into the engine.
The USAAF later ordered 310 P-51As, which were essentially A-36s without the dive-brakes and nose-mounted weapons, leaving an armament of four wing-mounted 12.7 mm Browning machine guns. An Allison V-1710-81 1,200 hp was fitted and used the same radiator and air intake as the A-36A. The P-51A was still fitted with bomb racks although it was not intended to be used primarily as a fighter-bomber and the racks were mainly used to carry drop tanks
Besides dive bombing, the A-36A racked up aerial victories, totaling 84 enemy aircraft downed. As fighting intensified in all theaters where the A-36A operated, the dive bomber began to suffer an alarming loss rate with 177 falling to enemy action. The main reason for the attrition was the hazardous missions that placed the A-36A “on the deck” facing murderous ground fire. German defenses in southern Italy included placing cables across hill tops to snare the attacking A-36As. Despite establishing a reputation for reliability and performance, the one “Achilles’ heel” of the A-36A (and the entire Mustang series) remained the ventral-fuselage location of the radiator/cooling system, leading to many of the losses. By June 1944, A-36As in Europe were replaced by Curtiss P-40 Warhawks and Republic P-47 Thunderbolts.
The aircraft model shown here was a North American A-36 Apache of the 86thFBG, 527th FBS showing with only approx. 100 sortie markings in winter 1943/44. In the end the whole side was full of 190 bombing logs, before it was struck off charge. Because it was such a long-lasting aircraft the late-war blue markings were painted over the temporarely red-framed markings anf therefore appear distinctive darker as the blue in the disk (Ref.: 24).