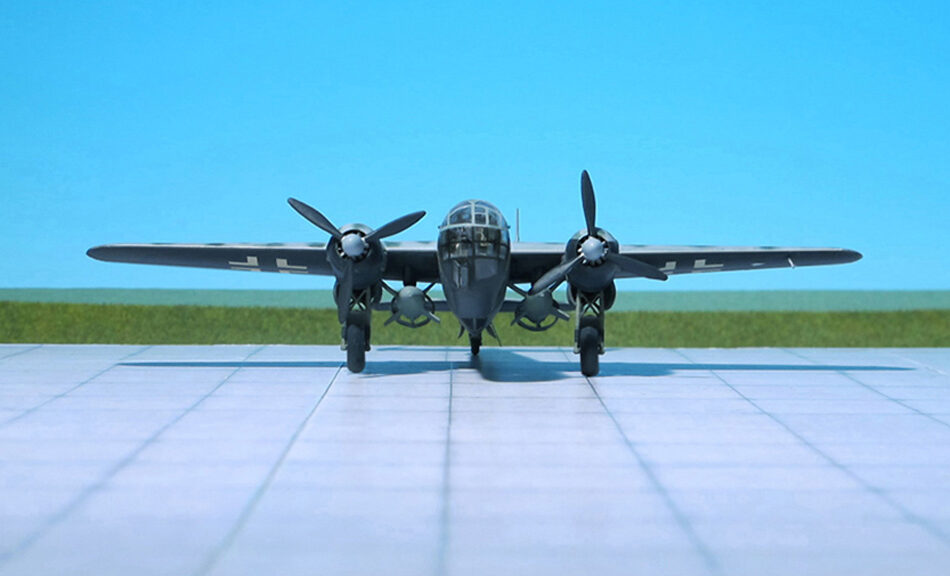 COMMENT: The Dornier Do 217 was a bomber used by the German Luftwaffe during World War II as a more powerful development of the Dornier Do 17, known as the Fliegender Bleistift (German: “flying pencil”). Designed in 1937 and 1938 as a heavy bomber but not meant to be capable of the longer-range missions envisioned for the larger Heinkel He 177 Greif (Griffon), the Do 217’s design was refined during 1939 and production began in late 1940. It entered service in early 1941 and by the beginning of 1942 was available in significant numbers.
The Dornier Do 217 had a much larger bomb load capacity and had much greater range than the Do 17. In later variants, dive bombing and maritime strike capabilities using glide bombs were experimented with considerable success being achieved. Early Do 217 variants were more powerful than the contemporary Heinkel He 111 and Junkers Ju 88, having a greater speed, range and bomb load. The Do 217 served on all fronts in all role as a strategic bomber, torpedo bomber and reconnaissance aircraft. It also performed tactical operations, either direct ground assault or anti-shipping strikes. The Do 217 was also converted to become a night fighter and saw considerable action in the Defence oft he Reich campaign until late in the war.
In 1943, the Do 217 was the first aircraft to deploy precision-guided munition (PGM) in combat, when Ruhrstahl Fritz X radio-guided bombs sank the Italian battleship Roma in the Mediterranean.
To replace the Do 217E, the RLM planned for the He 177A-3 and A-5 to be the long-range carrier aircraft for missiles, owing to the lack of BMW engines to power the Dornier but problems with the engine reliability of the He 177A led to the failure of the plan.
In early 1942, tests on a new and improved, completely glazed cockpit for the Do 217K series had been underway at the Hamburger Schiffbauanstalt (Hamburg Shipbuilding Institute). Do 217E-2s were fitted with a new streamlined “stepless cockpit” following its conceptual debut in January 1938 for the Heinkel He 111P, as this design philosophy became the standard for almost all German bombers later in World War II, which eliminated the separate windscreen panels for the pilot of earlier versions of the Do 217. The lower nose of the Do 217K-version also retained the Bola (Bodenlafette, ventral gun mounting) inverted-casemate gondola for a rearwards-aimed ventral defensive armament emplacement, with its forward end fully incorporated with the new nose glazing design. The cabin design passed the tests easily. Initial flights took place on March 1942 after teething problems had been resolved. The Do 217K V1 flew with BMW 801A-1s from Erpobungsstelle Rechlin. This was followed by the ten-airframe pre-production batch, Do 217K-01 to K-010. BMW believed that the type could reach an operational ceiling of 25.000 ft, notwithstanding an A.U.W of 16.8 t. Tests at Peenemünde in June and July 1943 showed that while the Do 217K could carry and deploy a Ruhrstahl Fritz-X precision guided munition, it was still controllable.
The Do 217K-1 was a bomber version and was powered by two BMW 801L engines with GM 1 nitrous oxide boost. This increased the Do 217K-1s maximum speed by 53 mph at 26.250ft at a rate of 100 g/s. With 50 g/s the aircraft’s operational ceiling could be extended from 27.560 ft to 32.152ft.
In total 220 Do 217K-1 were built followed by Do 217K-2 with extended wings (Ref.:24)